"Food allergies can be life-threatening, and prevention is key," Senator Zaffirini said. "Establishing clear guidelines for school districts to follow will save lives and prevent needless tragedies."

"This truly is a bipartisan effort," Senator Zaffirini said. "I am grateful to Rep. Branch and to Senator Carona, R-Dallas, who strongly support SB 27 and are critical to its passage."

The bill's supporters include The Food Allergy and Anaphylaxis Network, the Food Allergy Initiative, the Texas Allergy Asthma & Immunology Society, the Texas School Nurses Organization, the Children's Hospital Association of Texas and a committee of food allergy parents and advocates assembled from across the state.

In the last decade 12 states have published statewide guidance to help schools manage students with food allergies. Similar guidelines are expected to be published soon in Colorado, Missouri and Pennsylvania. Senator Zaffirini's legislative effort to protect children with food allergies began in 2005, when she passed legislation allowing public school students to carry EPI-pens and self-administer them in the event of a severe allergic reaction.

SB 27 was sent to the House of Representatives for consideration. The continued progress of this and all bills authored by Senator Zaffirini can be monitored via the internet at www.legis.state.tx.us or by contacting the Texas Legislative Reference Library's toll free in-state hotline, 1-877-824-7038. 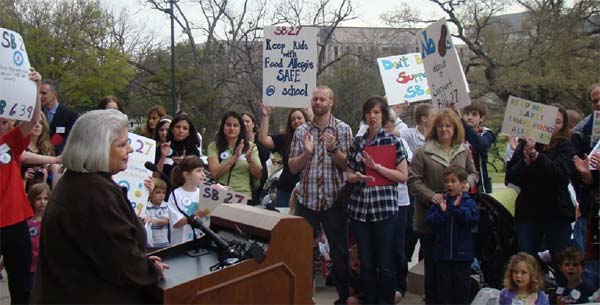 CHILDREN WITH FOOD ALLERGIES and their families rally at the Texas Capitol in support of Senate Bill (SB) 27 by Senator Judith Zaffirini, D-Laredo. Chair of the Senate Higher Education Committee and a member of the Senate Health and Human Services Committee, Senator Zaffirini authors legislation promoting health and safety for all Texas children.