"I am delighted to welcome the delegation from the Washington's Birthday Celebration Association to Austin," Senator Zaffirini said. "What's more, I join the delegation in inviting my Senate colleagues and all Texans to attend Laredo's cherished annual patriotic celebration."

For 114 years, The Washington's Birthday Celebration has delighted Laredoans and visitors alike with a grand display of patriotism that includes parades, fireworks extravaganzas, galas and an international fair and exposition. The event, which began Jan. 15 and ends Feb. 20, is the largest celebration in the nation honoring the father of our country.

Participants include the Celebration's Abrazo Children, who will exchange hugs at the middle of the international bridge at the inspiring international friendship ceremony. The United States' representatives are Katarina Garcia and Evan A. Valls, and Mexico's representatives are Paloma Chapa Mendoza and Ernesto Knosel Reina. Joining the delegation was Giampaolo Consigliere, Executive Vice President of BBVA Compass, which sponsored the delegation's visit.

"The Washington's Birthday Celebration is not only a celebration of our fierce patriotism, but also a wonderful opportunity to honor our relationship with our sister city, Nuevo Laredo, and our sister country, Mexico," Senator Zaffirini said. "International friendship and collaboration are the hallmarks of Laredo's success." 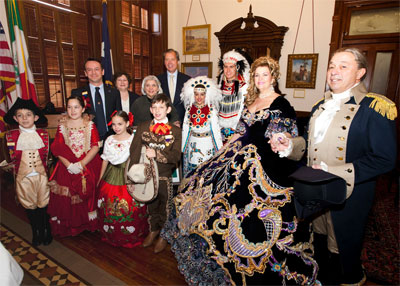