Texas qualifies for this federal Child Safety and Child Booster Seat Incentive Grant funding because of Senator Zaffirini's Senate Bill (SB) 61 (2009), which requires that children younger than 8 be secured in child passenger safety seats, unless they are taller than four feet, nine inches.

"As we celebrate Child Passenger Safety Week Sept. 13 - 17, I am delighted that this critical funding will help protect child passengers," Senator Zaffirini said. "The funding will promote a host of child passenger safety initiatives, including enforcement, training regarding the use of child seats, public education and purchasing child safety seats for low-income families."

SB 61, which went into effect on Sept. 1, 2009, is expected to reduce by 59 percent children's risk of serious head, spinal cord or internal organ injuries.

Failure to secure a child in a booster seat is prosecutable offense. Fines are $25 for first offenses and up to $250 for subsequent violations.

"Children are our most precious cargo, and drivers transporting them have additional responsibility." Senator Zaffirini said. "It is my prayer that no child dies or is injured because he or she was not secured properly in a moving vehicle."

State and local agencies, including many police and fire departments, will check car seats free to ensure that they are installed properly. Additional information regarding booster seat requirements and lists of child safety seat inspection locations and events can be found at http://www.dshs.state.tx.us/saferiders/. 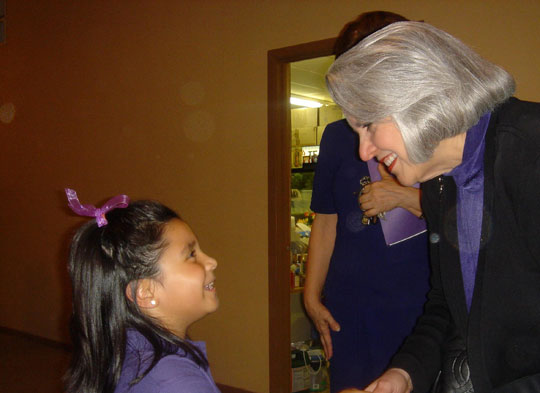 SENATOR JUDITH ZAFFIRINI enjoys interacting with children and championing safety issues for themselves, their families and friends. Shown here with Lauren Perez of Carrizo Springs, she prioritizes ensuring that parents understand the importance of booster seats for children younger than 8 and shorter than four feet, nine inches.