(AUSTIN) — Texans with life-threatening illnesses will be able to enroll in clinical trials with the hope of finding a cure while having their routine care costs covered by their health insurance.

Currently, because they must choose between the two, only three percent of eligible oncology patients enroll in clinical trials. Fortunately, the Texas Legislature resolved this unacceptable scenario.

The bill will allow patients with critical illnesses to enroll in clinical trials without fear of their insurance companies refusing to reimburse the costs of routine medical expenses or of dropping them completely from coverage.

"I am proud to champion legislation that will protect patients' rights and to encourage enrollment in clinical trials that could produce life-saving treatments for critical illnesses," Senator Zaffirini said.

"Clinical trials drive our progress against cancer and many other life-threatening illnesses, and they often are the most promising option for patients with disease resistant to standard therapy,” said Dr. John Mendelsohn, president of The University of Texas M. D. Anderson Cancer Center, home of the largest clinical trials program for cancer in the world.

He stressed that “breaking down barriers to patient participation, such as coverage of routine care, only stands to accelerate our advances, and, ultimately, our quest to provide the greatest hope for each individual patient. Covering the cost of the routine aspects of care provided by a clinical trial, but not the cost of the experimental therapy or any extra tests needed, is a logical and highly beneficial next step."

The bill was sent to the governor for his consideration. He can sign it, allow it to become law without his signature or veto it.

Unless vetoed, SB 39 will become effective on Sept. 1. 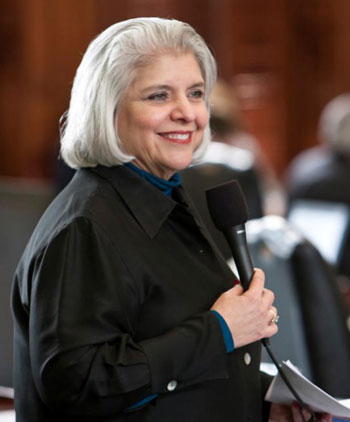