"I truly am delighted to renew my unwavering support for all families in our district," Senator Zaffirini said. "I especially look forward to prioritizing education and health and human services and to ensuring the health and welfare of Texans, especially those whom I represent." She returns as the highest-ranking senator for Bexar County and the border region.

First elected in 1986, Senator Zaffirini has received more than 600 awards and honors for her legislative, public service and professional work, including more than 100 awards for excellence in communications.

Her legendary work ethic is reflected in her 100 percent voting record in the Texas Senate, having cast more than 38,530 consecutive votes since 1987. She has sponsored and passed 581 bills and 51 substantive resolutions and co-sponsored and passed another 278 bills.

Her 2007 legislative successes include sponsoring and passing Senate Bill (SB) 6, which protects Texas children and families from sexual Communication and solicitation via the internet; SB 99, which supports persons living in Texas' most impoverished communities by increasing the number of state agencies required to submit data about projects that serve colonias; SB 1050, which creates new work-study opportunities for college students by developing a program through which students could serve as peer mentors and tutors as part of their work-study financial aid program; and SB 1051, which provides waivers to the core curriculum for foreign students enrolled in international institutions in a joint-degree program with Texas colleges and universities.

"I look forward to working with Lt. Gov. Dewhurst and my Senate colleagues to pass legislation that places families first, improves public and higher education and increases access and availability of quality health services," she said.

The lieutenant governor is expected to appoint new Senate committees this month. 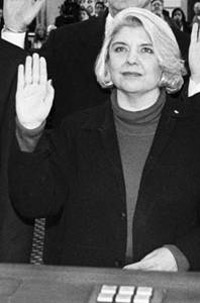 SENATOR JUDITH ZAFFIRINI is sworn-in during ceremonies at the Texas Senate on Tuesday. She represents Senate District 21, including 16 counties and northeast Bexar County. The highest ranking Hispanic and second-highest ranking senator in Texas, she was first elected in 1986.