(AUSTIN) — The Senate Finance and Transportation Committees today (Tuesday) held a joint hearing to investigate the Texas Department of Transportation's (TxDOT) claim that it does not have sufficient funds to continue adding lanes and building new highways in Texas.

Senator Judith Zaffirini, D-Laredo, vice chair of the Senate Finance Committee, joined 19 members of the two committees to question officials from the Legislative Budget Board (LBB), the State Auditor's office, and TxDOT regarding TxDOT's claim that it no longer has necessary funding to continue work on public roads, though it continues to spend tax money to support toll projects.

"I am dismayed that the legislature didn't receive accurate information regarding TxDOT spending," said Senator Zaffirini. "It is crucial that we get to the bottom of this, as projects across the state, including in Senate District 21, are being delayed or cancelled."

During the 80th Legislative Session funding was appropriated at the level TxDOT requested, and it became apparent later that the agency over-planned and committed to too many projects.

After Amadeo Saenz, TxDOT Executive Director, admitted that the problem was caused by poor planning and said the agency accepted responsibility for the problem, Senator Zaffirini reprimanded agency representatives for being "intellectually dishonest with the public."

"Their problem," Senator Zaffirini said, "is that they planned poorly and disregarded legislative intent. Many of us believe that this is a ploy to pressure legislators to approve toll roads."

First, the agency blamed the U.S. Congress and the "uncertainty of federal funds." This includes a projection that the Federal Highway Trust Fund "will go $4 billion in the negative in 2009", current rescissions in previously promised contract authority of $666 million for Texas and a potential $950 million in rescissions by 2009.

Second, the agency blamed the legislature for moving state transportation dollars to pay for other state priorities and for imposing a broad moratorium on "certain financing tools," an obvious reference to toll roads.

Senator Zaffirini stressed that the talking points never expressed the agency's responsibility or remorse for causing the problem.

Senate Finance will continue to work with agency representatives, the State Auditor's Office, and the Legislative Budget Board throughout the interim to improve the agency's internal controls.

"We must restore faith in the information that TxDOT presents to us as we prepare for the 2009 session to ensure that these type of problems do not happen again," Senator Zaffirini said. 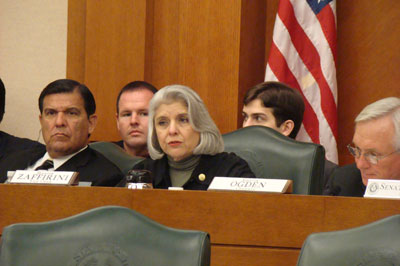 SENATOR JUDITH ZAFFIRINI, D-Laredo, questions Texas Department of Transportation officials about their recent shortfall. Zaffirini has served as vice chair of Senate Finance since 2003 and as a member since 1991.