(HEBBRONVILLE) -- Senator Judith Zaffirini, D- Laredo, Saturday (Nov. 3) served as Grand Marshal for the 3rd Annual Hebbronville Vaquero Festival Parade. The annual Vaquero Festival celebrates the iconic guardians of the South Texas ranching culture and recognizes the many contributions vaqueros provided to the early settlement of South Texas and the establishment of a prominent ranching industry within Jim Hogg County.

The first guest to arrive for the 8 a.m. Vaquero Breakfast, Senator Zaffirini not only mingled with residents and visitors, but also helped with the cooking. First she took a turn stirring the chorizo at the taco and pan de campo grill, then she stirred the oversized kettle of carne guisada.

After the parade, Senator Zaffirini presented a Texas flag that flew over the State Capitol to the parade organizers Juan Carlos Guerra, Brenda Haner, Susan Dickens and Imelda Diaz.

"The vaquero is the original rider and tamer of the West, and our state and regional identity owes much to the proud legacy of the Mexican cowboy," Senator Zaffirini said. "It truly is an honor to preside as Grand Marshal for the Hebbronville Vaquero Festival Parade. I also am proud to represent this community and its rich culture and history in the Texas Senate."

During the 2005 Legislative Session Rep. Juan Escobar, D-Kingsville, and Senator Zaffirini passed House Concurrent Resolution 172, which designated Jim Hogg County as the official Vaquero Capital of Texas. Shortly after the resolution's passage Hebbronville held the first Vaquero Festival and established itself as the cultural center of Texas' proud vaquero culture and heritage. 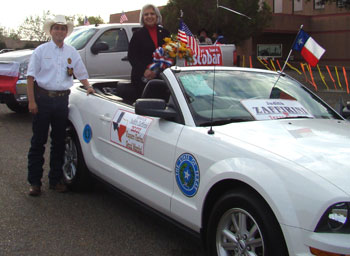 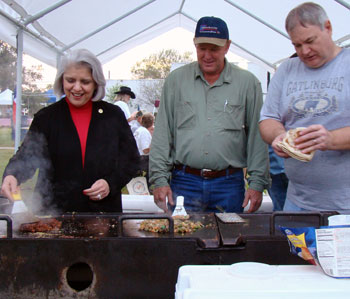 SENATOR JUDITH ZAFFIRINI helps cook the chorizo for the Vaquero Festival Breakfast. Marty Sorrells and Virgil Langford (L-R) are among the volunteers who prepare hundreds of breakfast tacos and pan de campo pockets. 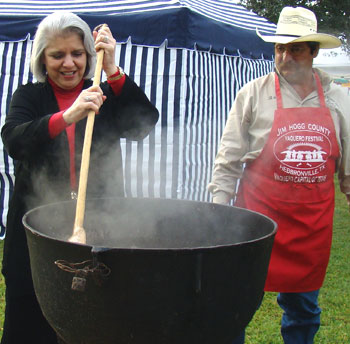 SENATOR JUDITH ZAFFIRINI, D-LAREDO, stirs the carne guisada during the Vaquero Festival Breakfast. Looking on is Ray Saenz, who enjoys the break from cooking the guisado and beans for hundreds of expected guests.