(AUSTIN) -- Combining modern technology, expertise of leaders and a passion for increasing access to, participation in and affordability of higher education, Senator Judith Zaffirini, D-Laredo, Thursday (Oct. 25) conducted the first in a series of Telephone Town Hall Meetings for SD 21 families. More than 3,000 persons participated in the conference that included the opportunity to have their questions answered by the senator and higher education leaders.

They were assisted by her staff, including Dr. Warren von Eschenbach, Director of the Senate Higher Education Subcommittee, and Brent Whitaker, Budget Director.

"Participants were mostly students, parents and educators who were eager to learn more about higher education," Senator Zaffirini said. "They could ask any question, but most focused on access and affordability. I appreciate greatly the higher education leaders who took the time to interact freely with my constituents."

A recorded message by Senator Zaffirini was sent simultaneously to callers across the district. Persons reached were invited to join the Telephone Town Hall Meeting in progress and to press "0" to ask a question.

"We talked for an hour and 20 minutes and answered every question raised," Senator Zaffirini said. "It was highly informative for my constituents, and they truly appreciated interacting with higher education leaders." 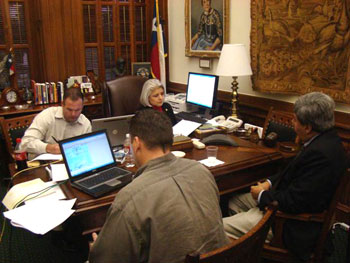