Effective immediately, it will allow students with disabilities who are in individualized education programs (IEP) and who have completed four years of high school to participate in graduation ceremonies and receive attendance certificates. They would receive their diplomas upon completing their IEP.

"I was proud to sponsor and pass Scooter's Bill and am delighted that it is now Scooter's Law," Senator Zaffirini said. "The new law will provide students in IEP programs with the opportunity to graduate with their peers and obtain a sense of closure as their classmates move on from high school. This is a fitting and pleasant end to Scooter Long's story of hard work and advocacy on behalf of students with disabilities."

SB 673 is named "Scooter's Bill" in honor of Gene "Scooter" Long, a Dallas IEP student who was denied participation in his class's graduation ceremonies by the Dallas Independent School District.

The new law calls for a consistent policy throughout Texas. What's more, it will allow students to continue their IEP programs after participating in commencement ceremonies and would not preclude their receiving high school diplomas upon completing the program. 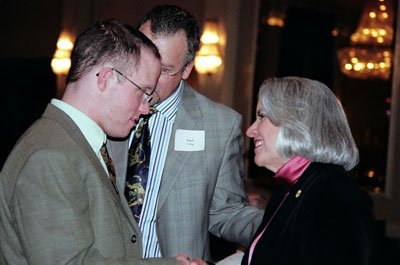 SENATOR JUDITH ZAFFIRINI, D-LAREDO, greets Gene "Scooter" Long and his father Ralph at the Arc of Texas 2007 Leadership Award Ceremony where Senator Zaffirini was honored for her outstanding support and advocacy of persons with intellectual and developmental disabilities. Scooter's Law is effective immediately.