Austin, TX -- The Texas Senate today (Tuesday) passed Senate Bill 49 by Senator Judith Zaffirini, D-Laredo, which would provide financial relief to college students by allowing them to purchase textbooks tax-free at the beginning of the fall and spring semesters. The bill would establish two 10-day periods per year during which a college student with a valid student identification card could purchase textbooks tax-free.

"The impassioned testimony before the Senate Finance Committee by students supporting SB 49 sends a clear message that college students are in need of financial relief from the escalating costs associated with higher education," Senator Zaffirini said. "I truly am delighted that this bill was passed by the Senate and thank Lt. Governor David Dewhurst and the student organizations who worked closely with me to pass SB 49."

This is Senator Zaffirini's third attempt to pass this legislation. She authored similar bills during the 2005 Regular and Special Legislative Sessions. 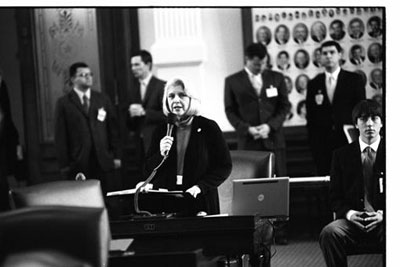 SENATOR JUDITH ZAFFIRINI, D-LAREDO, lays out SB 49 before the Texas Senate. The bill would create two 10-day periods per year during which a college student with a valid student identification card could purchase textbooks tax-free.