Austin, TX -- The Texas Senate Thursday (April 26) passed Senate Bill 1234 by Senators Judith Zaffirini, D-Laredo, and Kirk Watson, D-Austin, which would redefine planning for higher education. It would require the Texas Higher Education Coordinating Board (THECB) to redirect its higher education master plan to prepare students to participate effectively in the state's public affairs and in the global economy.

To meet the goals of closing the gaps in higher education, SB 1234 would provide greater specificity as to how the Coordinating Board develops its plan and would ensure that the state is best able to address the needs of its students and institutions.

"SB 1234 combines three effective bills that will enhance greatly the state's ability to create higher education excellence," Senator Zaffirini said. "In Closing the Gaps, Texas established an ambitious plan to ensure that more students are able to receive an outstanding college education. My and Senator Watson's bill improves this plan by directing the Coordinating Board to consider more detailed and more specific issues leading to statewide higher education success."

"This legislation offers a roadmap to make Texas a force in the 21st Century economy," Senator Watson said. "Texas can and must do a better job of preparing future generations for the possibilities and challenges that lie ahead. Here, we will approach higher education through a long-range lens, and that holds great promise for our children and our state."

SB 1234 includes provisions from SB 1919 by Watson, which would charge the THECB with considering the state's allocation of and need for resources for medical education, including graduate medical education; geographic distribution of these resources; and the value of associating a medical school with a top-tier academic campus.

The bill also includes provisions from SB 1772 by Watson, which would charge THECB with discovering incentives and requirements for seamless student transitions between and among high schools, community and technical colleges, universities, and health-related institutions, including concurrent enrollment and dual credit; examining the current and projected capacity concerns of The University of Texas at Austin and Texas A&M University in College Station; methods for ensuring that these institutions maintain their competitiveness with other flagship universities; the creation of additional flagship public research universities; alternative methods of funding universities and community colleges, in particular whether and how research universities should be funded; and a new component of the TEXAS Grant program to include a work study program that targets students in grades P-12 to ensure that they become college ready. 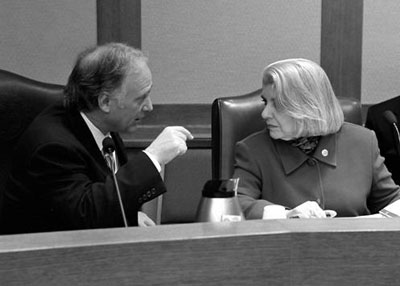 SENATORS JUDITH ZAFFIRINI, D-LAREDO, AND KIRK WATSON, D-AUSTIN, discuss SB 1234. The bill would require the Texas Higher Education Coordinating Board (THECB) to redirect its higher education master plan to prepare students to participate effectively in the state's public affairs and in the global economy.