(AUSTIN) -- The Texas Disability Policy Consortium and the AARP in conjunction with a coalition of aging and disability groups today (Wednesday) rallied at the State Capitol to encourage legislators to eliminate waiting lists and fund access to community care for 90,000 persons with disabilities. Currently more than 90,000 Texans are on waiting lists for home and community based services and care.

"With only 61 days before the 2007 legislative session adjourns sine die, it is absolutely imperative that we unite to pass good legislation, stop bad bills and focus especially on increased funding to reduce the waiting lists for health and human services programs," Senator Zaffirini said. "We should do everything in our power to adopt a 10-year plan to eliminate waiting lists and invest the much needed resources so long term care services can be provided at home."

As vice chair of Senate Finance, Senator Zaffirini worked to secure funding for a 10 percent wait list reduction and will continue to work toward increased funding for an additional 10 percent. 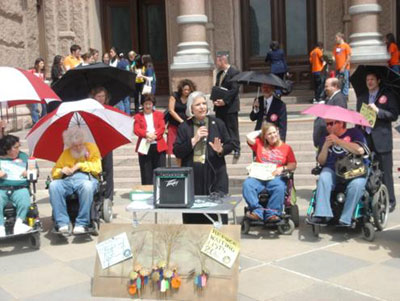 SENATOR JUDITH ZAFFIRINI, D-LAREDO speaks to a coalition of aging and disability advocate groups as they rally on the south steps of the Capitol to encourage legislators to eliminate waiting lists for persons with disabilities.