"Children are especially vulnerable to victimization. Their trusting natures and naiveté make them perfect targets for perpetrators -- both people they know and those they don't," Senator Zaffirini said. "My bill strengthens laws and provides effective solutions that not only will keep children safe from online exploitation and solicitation, but also will punish violators appropriately. I appreciate greatly Lt. Governor Dewhurst's leadership in promoting the Texas Children First plan."

It will require internet service providers (ISP) to respond immediately to subpoenas, search warrants or other court orders during an emergency; will allow prosecutors to seek consecutive prison sentences for the online solicitation of a minor; use state rewards programs to emphasize reporting and apprehending predators and criminals; and create a clearinghouse of ISP contact information in the Attorney General's office so prosecutors can access important information necessary to prevent online predatory behavior. 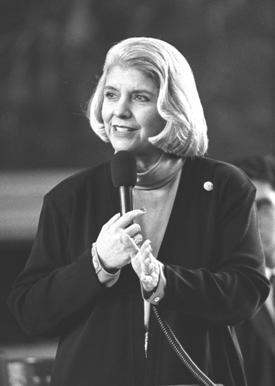 SENATOR JUDITH ZAFFIRINI, D-LAREDO, lays out SB 6 before the Texas Senate. SB 6 would protect Texas children and families from sexual communication and solicitation via the internet.