(AUSTIN) -- The Senate Education Committee on Tuesday (March 6) unanimously recommended Senate passage of Senate Bill 673 by Senator Judith Zaffirini, D-Laredo, which will allow a student in an individualized education program (IEP) who has completed his or her fourth year of high school to participate in graduation ceremonies and receive an attendance certificate.

Current law gives school boards discretion over the general graduation policies for their district. The policies range generally among four categories, each requiring students to meet various qualifying standards to be graduated. Few exceptions exist that would allow students with an IEP to participate in graduation ceremonies.

SB 673 is named "Scooter's Bill" after Gene "Scooter" Long, a Dallas IEP student who was denied participation in his class's graduation ceremonies by the Dallas Independent School District. After Scooter and his parents, Ralph and Linda Long, testified, the members of the Education Committee and audience members thanked them with a standing ovation.

"This bill's namesake truly is a testament to the courage and steadfastness needed to achieve educational goals," Senator Zaffirini said. "These are students who want to be graduated and want to participate in graduation ceremonies with their peers. SB 673 certainly will allow them to achieve this goal, and I applaud Scooter and thank him and his parents for their strong and effective testimony at today's hearing." 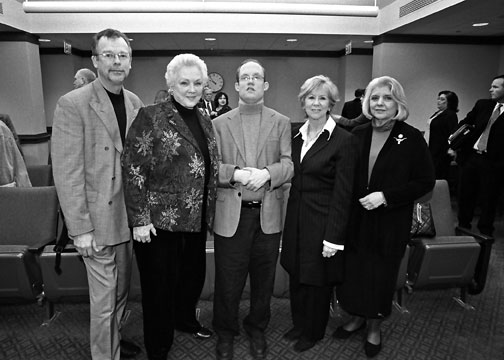 SB 673, "SCOOTER'S BILL," is recommended unanimously for Senate passage by the Senate Education Committee. Joining Senator Judith Zaffirini, D-Laredo, to testify in behalf of Scooter's Bill are (L-R) Ralph and Linda Long and their son, Scooter. Also shown is Senator Florence Shapiro, chair. Scooter's Bill would allow IEP students who have completed four years of high school to participate in commencement ceremonies with their peers.