(AUSTIN) - Senator Judith Zaffirini, D-Laredo, today (Monday) received the Mirabeau B. Lamar medal from the Association of Texas Colleges and Universities (ATCU) for her outstanding support of and advocacy for Texas higher education. Nominated by Dr. Flavius Killebrew, president of Texas A&M at Corpus Christi, she was chosen by ATCU's Lamar medal selection committee for championing higher education in general and public and private colleges and universities throughout the state.

"I truly am delighted to receive this prestigious award because higher education is my passion," Senator Zaffirini said. "The Lamar medal is an outstanding award named for the 'Father of Texas Education.' It's previous recipients have carried Lamar's vision of ensuring statewide educational resources to generations of Texas students, a worthy goal for all of us."

ATCU is composed of presidents and chancellors from public and private colleges and universities throughout the state, including community and junior colleges.

Senator Zaffirini has won more than 550 awards for her professional and public service work, including more than 94 for communication projects. She continues to receive awards for her public service and professional work. Awards received this year include the Texas Advocacy Award from the American Cancer Society, the Texas Hospital Advocacy Tribute from the Texas Hospital Association, being named an honorary nun by the Sisters of Mercy and Mercy Ministries of Laredo, and honored as "Our Founding Leader in Health Education" by the Mid Rio Grande Border Area Health Education Center (AHEC), and the inaugural "Excellence in Patient Advocacy Award" from the Texas Dental Association (TDA) for her leadership in addressing dental issues in the Texas Legislature. 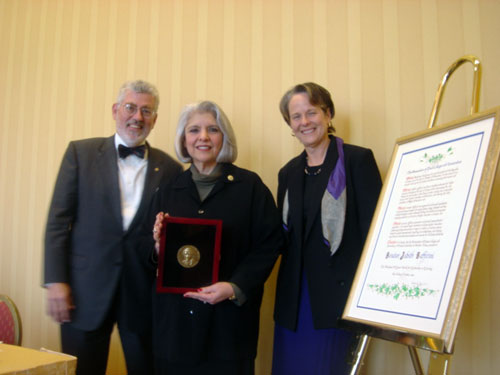