(LAREDO) -Senator Judith Zaffirini, D-Laredo, can add the title of "Sister" to her list of distinguished accolades. On Tuesday (June 6) the Sisters of Mercy and Mercy Ministries of Laredo bestowed upon Senator Zaffirini an honorary membership in their Sisterhood for her outstanding public service and commitment to improved health and wellness for Texas families.

"I am proud to be 'Sister Judith' and share this recognition with the many groups and persons, including the Sisters of Mercy and Mercy Ministries, who unite to promote, champion and improve health and human services, particularly for the needy," said Senator Zaffirini.

Mercy Ministries of Laredo provides primary healthcare, healthcare education and social services in the Laredo area and acts as a safe haven for victims of domestic violence. The organization aims to address the needs of all persons, especially those who are economically poor and marginal.

"Because I grew up with nuns and always have worked with them, I learned not only to prioritize faith, but also to collaborate in achieving our mutual goals," Senator Zaffirini said. "From them I learned the truth of the words of Luciano De Crescenzo: 'We are all angels with only one wing, and only by embracing each other can we fly.'" 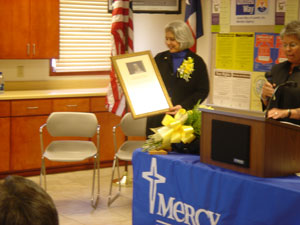 Senator Judith Zaffirini is named an Honorary Nun, "Sister Judith," by the Sisters of Mercy and Mercy Ministries of Laredo for her support of health and welfare legislation, personal commitment to its expansion and provision to all people and collaborative efforts dedicated toward improving and enhancing health and human services for all Texas families.