(AUSTIN) - Senator Judith Zaffirini on Monday (Dec. 12) presented the state's first stillborn birth certificate to John and Carolyn Nevels. The certificate commemorates the birth of the Nevels' son, Bump, who was stillborn on Aug. 1, 2002. The presentation was possible as the result of Senate Bill 271 by Zaffirini, which allows parents of a stillborn child to secure a certificate signifying that the birth resulted in stillbirth. Previously, there was no official recognition that a stillborn child was born, and parents received only a certificate of fetal death.

"I was pleased to author and pass the Texas Missing Angels bill," Senator Zaffirini said, "which will help relieve the grief of parents who previously received only certificates of fetal death for their children and no documentation of their birth. This new law enables them to memorialize and commemorate their children."

Effective Sept. 1 parents of stillborn children in Texas can receive a "Certificate of Birth Resulting in Stillbirth," regardless of the date of stillbirth. At the parents' request, the certificate would reflect the baby's name or "Baby Boy" or "Baby Girl" and the parents' surname.

"We heard some very emotional testimony during the committee hearing from parents who are still grieving," said Senator Zaffirini, former chair and current member of the Senate Health and Human Services Committee that unanimously recommended passage of the bill. "I hope this new law will help them and other parents know that the State of Texas recognizes the birth of their children and that their children deserve to be memorialized."

SB 271 by Zaffirini and Rep. Lon Burnam, D-Fort Worth, also requires any person who prepares a fetal death certificate, such as a funeral home employee, to offer the parents of a stillborn child a certificate of birth resulting in stillbirth.

Senator Zaffirini said the bill was inspired by the Nevels family, who maintain the website www.missingangelsbill.org/txstory.html. Their group had been working on this legislation since 2003.

She credited the parents not only for their generosity of time, but also for their deep love for their stillborn children and for their compassion for other parents in similar situations.

Additional information about the certificate, application and related fees can be obtained at www.dshs.state.tx.us/vs/field/stillbirth.shtm. 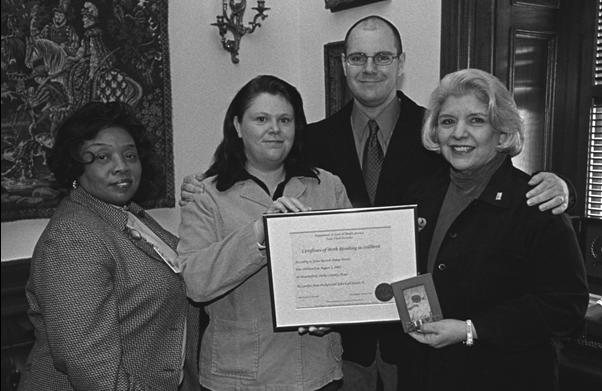 Senator Judith Zaffirini presents the state's first Certificate of Birth Resulting in Stillbirth to Carolyn and John Nevels at the Texas Capitol while holding a photograph of their child, Bump. The senator authored SB 271, which authorized the state certificates. Attending the presentation are (L-R) Geraldine Harris, director of the Texas Vital Statistics Bureau; Carolyn and John Nevels, certificate recipients; and Senator Zaffirini.