(AUSTIN) - Texas Monthly again honored Senator Judith Zaffirini, D-Laredo, as one of the 10 Best Legislators for 2005, calling her "relentless" as a champion of higher education and of health and human services. She is one of two women, two Hispanics and three Democrats included among the 10 best.

As the 79th Regular Legislative Session adjourned on May 30, Senator Zaffirini also was named one of the top legislators by two Capitol news online services. Capitol Inside chose her one of 13 Top Legislators for 2005 and Gallery Watch named her among the top four senators for the 79th Session.

Written by Paul Burka and Patricia Kilday Hart, the Texas Monthly article praised Senator Zaffirini for her tireless efforts in pursuit of "improving health care for the poor and enhancing higher education opportunities.

"Session after session, she is at the top of the list of lawmakers who do the most good," Burka and Kilday wrote.

Capitol Inside acknowledged her deserving appointments to important conference committees: "The veteran Laredo Democrat was chosen to carry the Senate's banner in conference negotiations on the state budget, protective services reform and the major tax swap bill because she's been in roles like this many times before and excelled most every time.

"The people who depend on her have come out better at the end of every session than they would have if she'd not been there to watch out for them--and the 2005 session was no exception to that trend."

Gallery Watch recognized Senator Zaffirini's relentless work on behalf of needy and vulnerable Texans via a balanced approach and getting a high rate of return for every tax dollar spent. "A champion for children's, education (public and higher), and human services issues, as vice chair of Senate Finance, Zaffirini also has a reputation for finding that last bit of meat from a budget carcass that others might have missed... (h)er reputation for beating even the sun to the capitol every morning during session is testament to her work ethic - and her passage of many key issues proves that early birds do indeed get the worms."

Fourth in seniority in the 31-member Texas Senate, Senator Zaffirini has won more than 530 awards and honors for her legislative, professional and civic accomplishments.

This session Lt. Gov. David Dewhurst appointed her Vice Chair of the Senate Finance Committee and to the Appropriations Conference Committee that wrote the state's $139.4 billion budget for 2006-07. He also appointed her to the Senate Committees on Education, Health and Human Services, and International Relations and Trade.

She chaired the work group that wrote the $49.9 billion budget for Article II, health and human services, of the appropriations bill.

"Together we secured funding not only to restore Medicaid and Children's Health Insurance Program services, but also $161.6 million in state funds to reduce the waiting lists for community supports for people with disabilities, mental health care and rehabilitation services," Senator Zaffirini said. "Our priorities were the safety net programs and the needs of the poorest of the poor, including children, the elderly, persons with disabilities, and pregnant women."

She said these honors "reflect not only on my staff's effectiveness and hard work, but also on the countless other persons who cooperated with us and support our efforts. These include advocates, state agency representatives and other staff members." 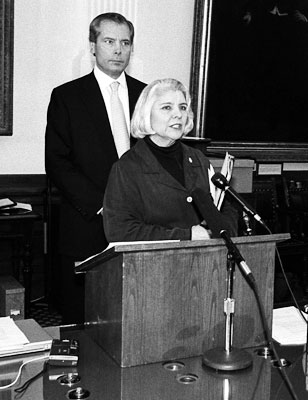