"One of the best ways to serve my constituents," Senator Zaffirini said, "is to work hand in hand with them. Meeting with local school officials helps me address and protect the interests of our district."

The Senator also polled the superintendents regarding public school finance issues proposed in the Senate, in the House and by Governor Rick Perry. She will compile the results and share them with her legislative colleagues.

In addition to hearing leading education authorities, participants offered suggestions and opinions about proposed plans. Speakers and attendees agreed that any plan the Texas Legislature implements should provide more funding for schools and equal access to an excellent education for all Texas children.

Participants expressed support for "recapture" and for increasing capacity under the current system.

"Providing an excellent education is the best thing we can do for our children and future generations," Senator Zaffirini said. "We need to find a way to do so that is not only fair and permanent, but also increases state revenues for public education." 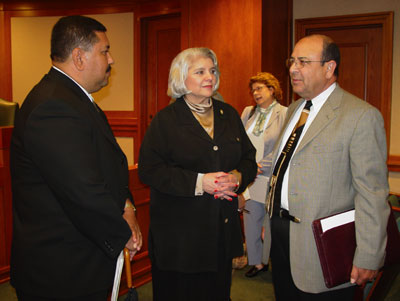 State Senator Judith Zaffirini discusses education issues with school superintendents from Senate District 21 at a public school finance reform forum that she hosted at the Texas Capitol. The event was sponsored by the South Texas Association of Schools.