LAREDO, Texas--During a Laredo meeting of the Region One area superintendents Senator Judith Zaffirini (D-Laredo) on Monday (March 1) received three coveted awards for her impressive leadership in education during the 78th Legislature. The Equity Center named her their "Champion for Children" for her longstanding and outstanding contribution to education in Texas.

The Region One Education Service Center presented her their 2003-2004 "Champion for Education" Award for her dedication and commitment to the students of Texas. The South Texas Association of Schools, composed of school superintendents from the Region One area, presented Senator Zaffirini a plaque in recognition of her remarkable work during the 78th Legislative Session, especially for her fight related to Senate Bill 929, which would have abolished education service centers, and for her leadership in funding the Instructional Facilities Allotment. "I opposed SB 929 in its original form, which would have eliminated regional education service centers and worked against its passage in the Senate Committee on Education,"

Senator Zaffirini said. "I supported the floor amendment, which gave educational service centers the opportunity to prove to the rest of the Legislature what I have long known--that centers play a valuable role in educational excellence for the students of Texas. Without the Instructional Facilities Allotment, property poor districts could not afford to build new schools."

If Governor Rick Perry calls a special session on school finance, Senator Zaffirini's priority will be to improve Texas schools and lower property taxes for all Texans, not just for some.

"Education has always been my top priority," Senator Zaffirini said. "Providing access to an excellent education for all children, regardless of where they live, is the best thing we can do for our families and for our state's future. I accept these awards in the name of everyone who works with us to make South Texas and our great state a better place to live and rear our families."

Senator Zaffirini has served on the Senate Education Committee since 1989. Recently Lt. Gov. David Dewhurst appointed her to the Health and Human Services Transition Legislative Oversight Committee and to the powerful Legislative Budget Board. 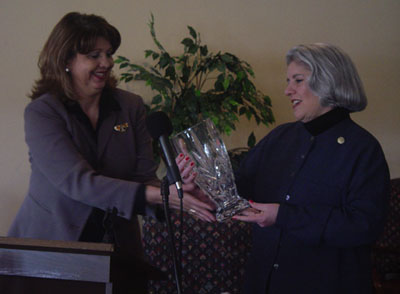