"I am proud to present Senate Resolution 111 with Senator Lucio Jr. in honor of the city of McAllen. We were joined here today by a great number of community and business leaders to commemorate McAllen's centennial celebration," Senator Hinojosa said.

"The City of McAllen is one of the fastest growing regions in the area. Just within the last three decades, our city has grown into an important center for commerce and a key region for international trade with Mexico and the rest of Latin America," Senator Hinojosa continued.

"Just recently, CNN/Money listed the city of McAllen as one of the best places to live within the United States and we have to make sure it remains this way. We need to adequately invest in the future of a rapidly growing population that enhances the economy Texas," concluded Hinojosa.

Senator Lucio shared his comments on McAllen day at the State Capitol.

"McAllen is an economic engine for South Texas, a growing part of District 27, and a place of innovation and creativity," Senator Lucio said. "We had Brownsville day here last week, McAllen day today and Harlingen day next week. It's exciting to see so many communities coming to Austin. We need Valley voices at the Capitol to put human faces to the needs of South Texas," Senator Lucio concluded.

McAllen Day was celebrated at the Capitol Tuesday with a series of events including a Senate Resolution, a luncheon, discussions about legislative issues affecting the Rio Grande Valley with legislators, and an evening Reception at the State Capitol. 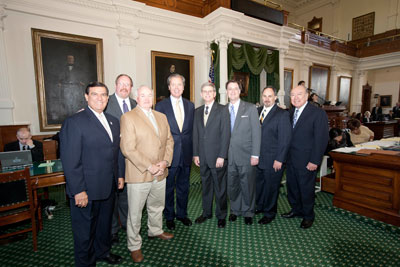