"I am honored that Lt. Governor Dewhurst has entrusted me with these important responsibilities. Through these appointments I am able to put the Coastal Bend and South Texas at the forefront of the discussions that will take place this legislative session. Now that appointments have been made we can get to work. "There is no question that we need to improve fiscal discipline in Texas but we cannot undercut the future of our state. In order to expand our economic force we need to invest efficiently in our infrastructure, education, agriculture and innovation.

"Transportation is the life blood of the Texas economy; billions of dollars go through our ports of entry and move through our roadways every day. There are serious funding challenges right now, and it comes at a time when areas like the Coastal Bend and South Texas are in need of transportation improvements. "We need to connect our communities to the interstate system in order to expand the commerce that is responsible for a large part of our economy. Improved roads will move people and products faster, keep our communities safe and ease the traffic burden for our fast growing population.

"South Texas and the Coastal Bend contribute a great deal to the state, and not just in terms of commerce, but also through agriculture and natural resources - we must propel these economic engines by investing in these communities. "Agriculture and Natural Resources contribute significantly to the Texas economy and as a member of these committees I plan to focus on how Texas can best manage its water resources, keep our air clean, best utilize our resources to fuel the Texas economy and best manage our food supply.

"I'm pleased to be part of the Senate Committee on the Criminal Justice. I've worked on these issues for many years, in particular with my work on the Texas Youth Commission and I am eager to help shape the best policies for the coming biennium.

"There are many difficulties ahead, but I am fully committed to the serve the constituents of Senate District 20 through my respective appointments this session."

Senator Juan Hinojosa, a Vietnam veteran, represents Brooks, Jim Wells, Nueces and part of Hidalgo County and has spent over 20 years to advocating for those issues that are most important to the citizens of Senate District 20.
Hinojosa was first elected into office in 1981, serving in the Texas House until 1990 and again from 1997 to 2002. During his tenure in the Texas House, Hinojosa passed landmark legislation, such as the establishment of the Regional academic Health Center (RAHC) which promotes physician training on the Texas/Mexico Border.
Since his election to the Texas Senate in 2002, Hinojosa has secured more than $84.7 million for new construction at Texas A&M-Corpus Christi and at the University of Texas-Pan American. Senator Hinojosa's efforts have brought millions in funding to support the growth of Senate District 20, composed of Brooks, Hidalgo, Jim Wells, and Nueces Counties. 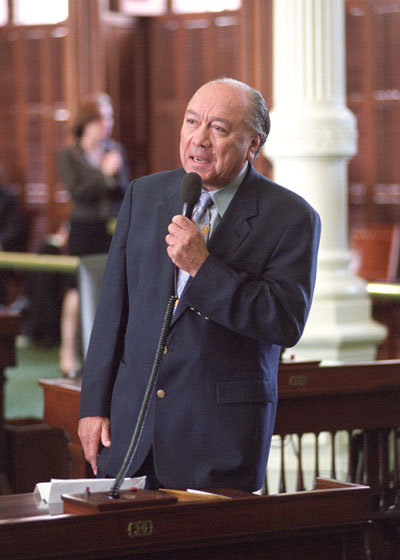