(AUSTIN) — Governor Greg Abbott expanded the agenda of the third special session on Wednesday, giving the Senate the opportunity to pass two major pieces of legislation. One bill uses surplus general revenue to temporarily buy down property taxes. Another would ask voters to amend the state constitution to allow judges to deny bail to some who are accused of the most serious violent offenses. 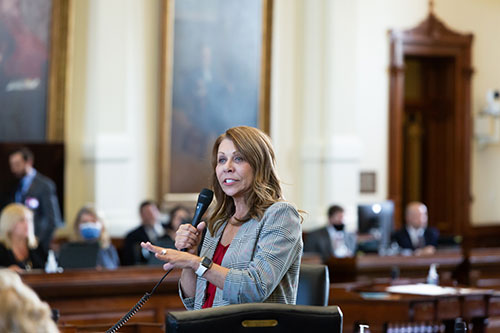 Senator Joan Huffman of Houston argued passionately in favor of a measure that would ask voters to amend the state constitution to permit judges to deny bail to dangerous, violent offenders.

Lt. Governor Dan Patrick put property tax cuts at the top of the Senate agenda even before Abbott added the issue, designating Houston Senator Paul Bettencourt's plan to temporarily compress property tax rates as Senate Bill 1. His bill would use unspent state revenue to compress property tax rates for the 2022-2023 school year. The amount of that compression will depend on how much is projected to remain in state coffers when the 2023 biennium ends that September. The bill would reduce the total state property tax bill by at least $2 billion for one year, which Bettencourt said would translate to savings of around $190 for the median homeowner in Texas. The total tax reduction could go as high as $4 billion if the comptroller says the state will have enough money in the bank when fiscal year 2023 ends.

Also Wednesday, the Senate approved - for the fourth time - a resolution that would amend the constitution to allow judges to deny bail to certain violent offenders. It currently requires that anyone accused of a crime have bail set, but that's a relic of the past, according to Senate Criminal Justice Committee chair and Houston Senator John Whitmire. "The guarantee of bond was a result of the Texas Revolution where the settlers were being held indefinitely by the Mexican government," he said. "Once Texans got the opportunity to write their own constitution in 1836 and again in 1876, they made certain that practice would never be repeated." In 2021, he said, with proper due process safeguards in place, it makes sense to allow judges to deny bail to the most dangerous violent offenders.

If approved by voters, SJR 1 would allow judges to deny bail to those accused of certain violent crimes in cases where there is clear and convincing evidence that denial of bail is necessary to ensure the person's appearance in court or if that person represents an ongoing threat to public safety, law enforcement, or alleged victims. It also requires that judges use the "least restrictive means" to hold an individual, which bill author and Houston Senator Joan Huffman said will protect the rights of lesser offenders. "This constitutional amendment actually protects both sides of the coin: those who should be held and those who we should not be holding and crowding the jails," she said. "It’s a very fair and balanced approach to the issues that we see in our state."

This week, said Huffman, the state got another tragic reminder of the need for this legislation. Houston Police Department Senior Officer William "Bill" Jeffery was shot and killed while serving a narcotics warrant on Monday. Another officer, Sgt. Michael Vance was wounded in the incident. "He was a career violent criminal who should not have been out on the street," Huffman said of the alleged perpetrator. "This officer should not have been murdered. It should not have happened…by God, we should do something about this."

While the measure has cleared the Senate with overwhelming majorities four times this year, in the House, it has yet to reach the two-thirds supermajority threshold required for any measure that would propose a constitutional amendment. Last special session the measure missed that mark by just a few votes, failing 83 to 35. It now heads back to the House for another attempt.

The Senate will reconvene Thursday, September 23 at 8:00 a.m.