(AUSTIN) — Members of the Senate Finance Committee on Tuesday approved a bill that would use some of the state's projected budget surplus to temporarily buy down property taxes. The issue is not on the agenda for this called session, though Lt. Governor Dan Patrick designated the bill SB 1, emphasizing its high priority in the Senate. The governor has discretion to expand the call to include whatever topics he desires and could add the issue before the session concludes by October 19th. 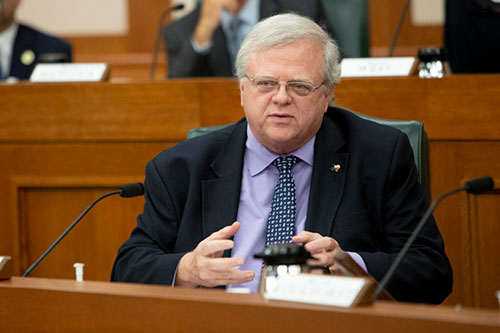 Senator Paul Bettencourt of Houston wants to use some of the state's surplus funds to lower local school property taxes.

SB 1, by Houston Senator Paul Bettencourt, would buy down property tax rates with part of the money left in the treasury after the end of the next biennium. "The basic tenet of this bill is simply this: if we have excess monies, give it back to the taxpayers," he said. Under the bill, the state would buy down local school property taxes by at least $2 billion, which translates into a savings of around $188 dollars for the median homeowner in Texas, said Bettencourt. Depending on how the economy looks next summer, that number could double. The bill would direct the state comptroller to update his estimate of the 2022-2023 ending balance in June, and would appropriate as much as half of that surplus - up to $2 billion - to further property tax compression. The current estimate for the ending balance, last updated by Comptroller Glenn Hegar in July, puts the balance at $7.85 billion when the fiscal biennium ends in September of 2023.

Some members expressed concerns that without adequate safeguards, local school officials will use this opportunity to ask voters to approve additional bond debt, effectively cancelling out any tax relief envisioned under the bill. Taxpayers wouldn't see their de facto rates go up, but neither would they see a reduction in their tax bill. "[Some districts] could certainly use this as a chance to go and sell bonds and tell their voters 'You won't see a tax increase,' but they'll also never see the tax decrease that we intend by this legislation," warned North Richland Hills Senator Kelly Hancock. He said that following a larger tax compression measure passed by the Legislature in 2006, there was an unprecedented increase in local school bond debt in the following two years. Hancock was one of several members who asked Bettencourt to amend the bill provisions to prevent this kind of "drop-and-swap" strategy from local school boards. Bettencourt told members that he believes a bill passed in the regular session that requires clearer ballot language for bond initiatives solves this issue. He did, however, promise members he would work to find language that tightens the bill even further. "It will be part of the bill. That is my commitment to you," he said. "Whatever we can do…will be part of the bill."

Senator Robert Nichols raised concerns about the temporary nature of the cut leaving taxpayers feeling the pinch in tight budget years. "I've been here long enough to know that some years, it gets pretty dadgum lean," he said. "These are the types of things that disappear real quick when you're short. If that happens, not only are you going to have your natural increase, but we're also going to have that swing because [the tax rate] was artificially depressed. So the increase will be a double whammy." Nichols said he, like all members, is in favor of cutting taxes, but would prefer a permanent solution, such as capping appraisal growth, rather than something that is subject to the volatility of the state and global economy.

The bill passed the committee unanimously and will now head to the floor.

Also Tuesday a Senate committee passed, for the fourth time, a bill that would require boys and girls to compete in UIL sports divisions that match the biological sex listed on their original birth certificate. This measure, carried during the regular session and all three special sessions by Lubbock Senator Charles Perry, has cleared the Senate three times but has yet to win passage in the House.

The Senate will reconvene Wednesday, September 22 at 10 a.m.