(AUSTIN) — Both chambers of the Texas Legislature approved a final version of the elections bill Tuesday that has kept lawmakers in Austin since the end of the regular session in May. That session ended with a quorum break in the House, where opponents of the measure walked out, depriving that body of the necessary members to conduct business. When Governor Greg Abbott called legislators back to pass the bill, opponents refused to return, heading instead to Washington, D.C. to lobby Congress in favor of sweeping voting rights legislation. They stayed away when the governor called a second special session, but enough members returned about halfway through the 30-day session to restore the House quorum. The House then moved quickly to pass the bill which had already cleared the Senate. With both the Senate and the House approving the conference committee report, the bill now heads to the governor for his signature. 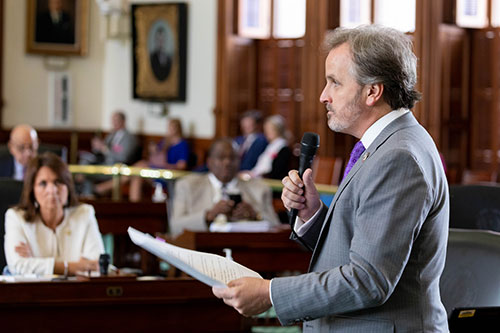 After one regular and two special sessions, SB 1, the elections bill authored by Mineola Senator Bryan Hughes, will make its way to the governor's desk.

A number of provisions in this bill sought to prohibit some of the expanded voting opportunities used by Harris County in the 2020 general election in order to cope with the COVID-19 pandemic. Though the county wasn't specifically empowered to enact such changes, they weren't banned by law either. The bill would change that by specifically outlawing some of these changes; counties can no longer use drive-through voting, though curbside voting will remain for individuals who are physically unable to enter a polling location. It sets uniform early voting periods for all counties, permitting counties to open polls for any 9 hour period between the hours of 6 a.m. and 9 p.m. and bans 24-hour voting periods. It also extends voting day protections that permit anyone who is still in line to vote when the polls close on voting day to early voting periods. It would make it illegal for county elections officials to mail unsolicited applications for absentee ballots to people who are not eligible to vote by mail in Texas. It would give poll watchers more latitude to observe election procedures but would require the Secretary of State to create a mandatory training program to ensure watchers know what they can and cannot do.

The final point of contention between the House and Senate versions regarded an amendment added by the House that would protect ineligible voters who cast a vote in ignorance. In 2016, Crystal Mason cast a provisional ballot while she was out on supervised release for a federal conviction and was thus ineligible. Ms. Mason insisted she was unaware that her status made her ineligible to vote, but Tarrant County prosecutors charged her with voter fraud and she was sentenced to five years in prison. Such a harsh penalty for a small mistake brought national attention to the case, and in response, the House added an amendment to the bill that would require a person to know that they are ineligible and cast a vote before they can be charged with fraud. That amendment was removed in the conference committee. Bill sponsor and Mineola Senator Bryan Hughes said that amendment came off the bill because of a fear that it could make it too hard to prosecute deliberate voter fraud. He cited a 19th-century state Supreme Court ruling - reaffirmed in district court rulings in 2010 and 2016 - that found it would be nearly impossible to prove a person knew they were casting a vote illegally. "The effect would be that a conviction for illegal voting by persons convicted of felonies could rarely be obtained because it would be an exceptional case in which proof could be made," said Hughes, quoting the 1888 ruling. Hughes said that instead, the bill would require a person convicted of a crime that affects their voting status be informed by the judge, and in writing, that they are ineligible to vote.

Though the Legislature has now finished work on the main issue of the special session, there is still plenty left to do before this 30-day session wraps up on Sunday.

The Senate will reconvene Wednesday, September 1, at 1 p.m.