(AUSTIN) — Tuesday and Wednesday the Senate advanced more legislation on the agenda set by Governor Greg Abbott. Late Tuesday, the Senate gave unanimous approval to a bill aimed at reforming the bail process in Texas. Legislation author and Houston Senator Joan Huffman says that too many violent and dangerous offenders are committing more crimes after being released on personal or low cash bonds. She cited the case of Houston resident Layla Steele, who was allegedly murdered by a man out on personal bonds for multiple felony offenses. "Layla was holding her son in her arms when she was shot by the defendant," said Huffman. "The individual who shot Layla - she had a protective order against him - and he was out on …seven felony bonds." She said Steele is one of five Harris County residents murdered by violent offenders out on bond since the Legislature adjourned the regular session on May 31. Huffman's legislation, SB 6 and SJR 3, seeks to create transparency and accountability for magistrates who make it too easy for dangerous offenders to get out of jail and would permit judges to deny bail to violent offenders. 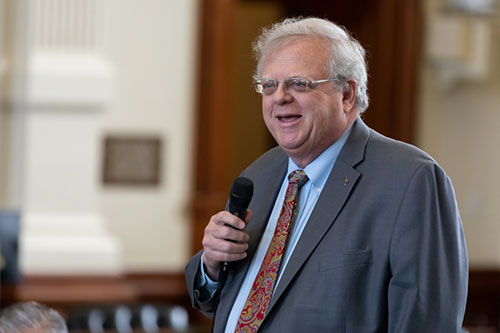 SB 6 would create a new risk assessment tool that would consider a number of metrics and put all that information before a judge or magistrate at a bond hearing. This includes possible bonds and conditions and the background and criminal history of the individual before the court. "It makes sure that… anyone setting a bond is examining the facts of the offense," she said. Judges would be required to look at all factors before setting bond, and all bond decisions would be put in a statewide searchable database. "If you have elected a judge and you want to know who set a bond, or released an individual out on seven felony bonds over and over again for violent offenses, that will now be public record." The bill would also create a training program for judges and magistrates regarding best practices for setting bonds.

SJR 3 would put a question on the November ballot that asks voters to amend the constitution to allow judges to deny bail to violent offenders when "clear and convincing evidence" indicates the offender would present an ongoing risk to public safety if released. Huffman stressed that low-level and misdemeanor offenders would still have all protections afforded to them under the constitution and prior federal court rulings. The proposed amendment would direct judges to set the lowest conditions required to hold an individual. "The low-level offenders, we want them held with the least restrictive means, but we want to make sure that those that are the most dangerous to our community are held," said Huffman. Both measures passed the Senate without objection.

On Wednesday, the Senate approved legislation by Houston Senator Paul Bettencourt that would offer some property tax relief for new homebuyers and senior citizens. SB 8 would let new homeowners claim their first-year homestead exemption in the year that they buy the home, rather than waiting until July 1 of the following year. "Homeowners need property tax relief in that first year they actually purchase their home," Bettencourt told members.

SJR 4, and its enabling legislation SB 12, would extend property tax compression passed as part of property tax and education reform in 2019 to those senior Texans who have fixed tax rates based on their status, lowering that rate even further. "This is extraordinary property tax relief for over-65 homeowners," said Bettencourt. "It can be hundreds if not thousands of dollars over time very quickly." All property tax measures passed Wednesday without objection.