(AUSTIN) — The Senate on Tuesday approved the top issue on the special session agenda, a call from Governor Greg Abbott for legislation that would "strengthen election integrity in Texas." "This bill is about making it easier to vote and hard to cheat," said bill author and Mineola Senator Bryan Hughes. To make it easier, Hughes says, the bill would expand early voting by keeping polls open for an extra hour on every weekday during the two-week early voting period. It also creates a process by which absentee voters can correct ballots when an error is detected or a signature verification is in question. 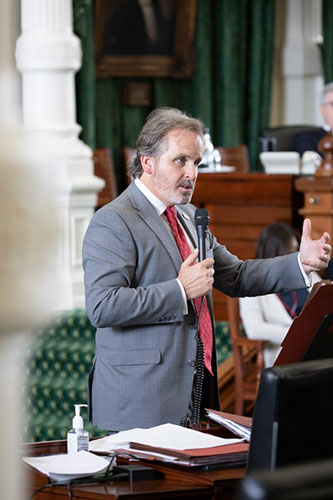 To increase election integrity, Hughes told his colleagues, the bill would expand the areas that poll watchers are entitled to observe and would also require that large counties place surveillance cameras in all central vote counting rooms. For mail-in ballots, voters would be asked to provide the either the number of their driver's license or state issued ID card, the last four digits of their Social Security number, or a statement that they have not been issued such a number.

It also targets the practice of vote harvesting. "That's the process by which paid workers instruct voters on how to vote - or sometimes vote for them - and then collecting those mail ballots and sending them in for the voter," said Hughes. He said that during 2018 primary elections in his district, vote harvesters falsely represented to able-bodied voters that they were eligible to vote by mail in one precinct, leading to a hundred-fold increase in requests for absentee ballots there. SB 1 would go after those who "try to get in between the voter and their ballot", said Hughes. "Those are not individual voters who are trying to cheat," he said. "That's these paid ballot harvesters…that's what this bill cracks down on and we make no apology." The bill also includes provisions to create a paper trail to track those who are assisting a large number of voters.

Other provisions in the bill would set uniform statewide hours for early voting, permitting polls to be open for nine hours between 6 a.m. and 9 p.m. It would also ban drive-through voting and disallow local officials from sending out absentee voting applications to voters who aren't eligible to vote by mail.

Senate opponents of the measure raised concerns that this bill would actually make it harder, not easier, to vote in the future. Houston Senator John Whitmire singled out the expanded rights for poll watchers. He worries that in the emotionally charged environment surrounding many contested elections, overly aggressive poll watchers will intimidate voters. "There won't be enough constables in Harris County to respond to the calls," he said. "You're going to have physical encounters." Hughes argued that the law already gives broad latitude to poll watchers that SB 1 is merely clarifying. Brownsville Senator Eddie Lucio raised concerns that the state would be making it harder for those with disabilities to vote. "I think will make voting much too difficult, and for many, to turn down voting," he said. "That's what I don't want to see.” Hughes pointed out that election judges would retain existing authority to make special accommodations for those who have challenges casting a vote.

As it leaves the Senate, the bill faces an uncertain future. House opponents to the legislation have broken quorum and traveled to Washington to press their case for federal voting reform. Without a quorum, the House cannot transact business, and if they don't return to Texas before the special session ends on August 6th, all legislation considered under the agenda set by Abbott will die. The governor has discretion to call as many sessions as he wishes and has vowed to do so until the bills pass. The Senate, said Lt. Governor Dan Patrick, will continue to consider and pass legislation irrespective of what's happening in the House. "The Senate will do our business this week," he said.

The Senate will reconvene Wednesday, July 14 at 11 a.m.