(AUSTIN) — Holding unusual Saturday and Sunday hearings, Senate committees continued considering topics Governor Greg Abbott placed on the agenda for the special session that began last Thursday. Saturday saw the Senate State Affairs Committee consider the session's marquee issue - elections. SB 1, by Mineola Senator Bryan Hughes would establish uniform early voting hours across the state, limiting the times that polls can be open to nine hours between 6 a.m. and 9 p.m. It would also ban drive-through voting, prohibit mass solicitation of mail-in ballot applications to non-mail eligible voters and gives poll watchers more latitude to observe during voting. The committee took hours of testimony from hundreds of witnesses and advanced the bill on a vote of 6 to 3 Sunday afternoon. It could be considered by the full Senate as early as Tuesday. 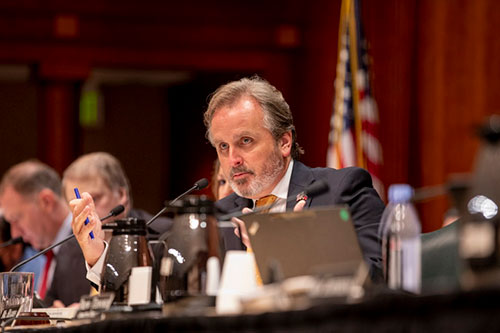 Mineola Senator Bryan Hughes will carry the Senate's major elections bill during the special session, as he did during the regular session.

Also over the weekend, the Senate Jurisprudence Committee heard a bill that seeks to prevent dangerous violent offenders from being released on lax bonds. Committee chair and bill author Senator Joan Huffman of Houston said that some judges are setting overly lenient bail conditions for dangerous criminals, contributing to the rise in violent crime in her city and around the state. "[This bill] is legislation which is really a direct response to the increase in violent and habitual offenders being released on personal bonds, as well as low cash bonds," she said. "This has had a direct result on crime in our communities." SB 6 would require judges or magistrates to consider a number of factors, including criminal history and risk posed to the public by an offender before setting bail. The committee approved that bill 3-0, sending it on to the full Senate. The bill works in conjunction with a proposed constitutional amendment, SJR 3, also by Huffman, which would ask voters to approve a change to the state charter permitting judges to deny bail to individuals who have committed violent offenses or sexual offense of the first degree. If approved by Texans, judges would have this discretion when there is "clear and convincing evidence" that a person is a significant flight risk or that their release would pose a risk to public safety. SB 6 is titled the "Damon Allen Act," in memory of a Texas state trooper who was killed by a person out on multiple felony bonds in 2017, said Huffman.

Monday, the Senate State Affairs Committee took up a bill that its author says is necessary to protect free speech and prevent a political schism of the internet. Senator Hughes, also the author of this measure, says that the handful of large social media platforms that now dominate the internet constitute a de facto "public square" and political and viewpoint-based speech should be protected on these platforms under the First Amendments. Hughes' bill, SB 5, would require large social media platforms to post their moderation policies and how they decide what content to present to users. It would also allow a person who is banned from a platform based on political- or other viewpoint-based speech to sue the company for the reinstatement of their account and posting privileges. If the plaintiff prevails, the platform would have to cover their legal fees.

In the Senate Health and Human Services Committee, members considered legislation that would require that a student participating in UIL or NCAA sanctioned sporting events compete in the division that matches the biological sex listed on their birth certificate. Current UIL rules require competition division based on birth certificates, but because a person who transitions gender can receive a new birth certificate from the state, this bill would require officials to consider the original birth certificate. Bill author and Lubbock Senator Charles Perry says that biologically-born males competing in female sports divisions have an inherent physical advantage. "[These bills] recognize the science of the competitive advantage granted to males at birth," he said. The committee heard two bills by Perry related on this topic: one that would cover both high school and college athletics, and one that would only cover high school sports.