(AUSTIN) — The Senate on Wednesday unanimously passed the session's two major appropriations bills: one that sets the state budget for the next two years and another to align state accounts with what was budgeted in 2019. That latter bill, HB 2, was also amended to require legislative input on allocation of discretionary federal aid dollars, ensuring that the governor has to call lawmakers back into Austin to deal with billions in pandemic relief funds expected to arrive in Texas after the session ends on May 31st. This guarantees the commitment Governor Greg Abbott made to legislative leadership last week when he promised to add federal aid spending to the agenda of a special session he must call this fall to deal with redistricting. "Any money that we have discretion over, we will now hold back until there is a gubernatorial-called special session," said Senate Finance Committee chair and Flower Mound Senator Jane Nelson. 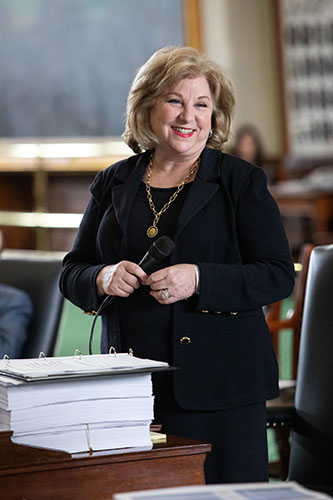 As chair of the Senate Finance Committee, Senator Jane Nelson of Flower Mound led the body's appropriations efforts for the fourth session in a row. The proposal received unanimous support Wednesday.

When the Legislature left Austin in 2019, the state's fiscal forecast was in good shape, according to Nelson, who is leading the chamber's appropriations efforts for the fourth session in a row. "When COVID hit, everything changed," she said. "Our attention turned to fighting a deadly virus. Our people suffered. Our economy suffered. Our agencies have expenses that were never anticipated, and with revenue declining everything was turned upside down with respect to our state budget." The 2020-2021 budget written last session went from an expected ending balance of nearly $3 billion to a projected shortfall of almost $5 billion by the summer. A resilient Texas economy and an infusion of federal cash, in combination with a vaccine that arrived earlier and was more effective than expected, turned those projections around. "Texas is coming back strong," said Nelson. "Our revenue situation has much improved."

Because of the part-time nature of the Texas Legislature, budgets are written prospectively, based on forecasts of expenses and revenue, so each session lawmakers must past a supplemental budget bill that trues up state ledgers between those expectations and what was actually spent and earned. Typically a cost to the state, and one that normally comes out of the ending balance, this year's supplemental represents a savings of $3 billion under what was planned for. Rising property values and declining attendance lowered the state's public education cost by more than $5 billion, and federal aid dollars covered $2.5 billion in staff salaries for state employees involved in the pandemic response. Accounting for expenses, SB 2 represents savings of around $2.7 billion less compared to what was appropriated in 2019.

The Senate also gave unanimous approval to the final draft of the state budget, worked out between House and Senate negotiators over the last few weeks. It appropriates $116.4 billion in discretionary state funds, and $248.5 billion when federal and dedicated funds are included, through September 2023. That's up 5.5 percent over last session, well within constitutional spending limits, said Nelson. It adds more than $3.1 billion to the state's public education budget in order to preserve the increases in state education spending that was the centerpiece of the 2019 session. Under this plan, the state would spend twenty percent more on public education than it spent four years ago. "It's a budget you should be proud of, members," Nelson told colleagues. Other budget highlights include a funding increase to record levels for women's health programs and $8.4 billion for mental health services across 25 state agencies - services that Nelson said are more important than ever as Texans try to bounce back from a year of crisis and uncertainty. The bill includes raises for DPS troopers, state game wardens and corrections officers and almost $60 million to combat human trafficking.

Once the House signs off on the final draft of the budget, it will head to the governor's desk for his signature. Because of the language added by the Senate, the supplemental budget bill will have to head back to the House for consideration.