(AUSTIN) — Lawmakers working on differences between House and Senate proposals for spending over the next two years unanimously approved a final draft Wednesday, sending the measure to the full bodies of each chamber for approval. Despite the pandemic and the resulting economic downturn, negotiations between the chambers were amicable and productive, said Senate Finance Committee chair and Flower Mound Senator Jane Nelson. "I have to tell you, there wasn't even one really good fight," said Nelson, who is leading the Senate's budget writing effort for the fourth session in a row. Her counterpart in the House, Appropriations Committee chair Representative Greg Bonnen of Friendswood, echoed Nelson's praise for conferees, who worked well together despite an unusually complex and challenging budgetary process. "We've landed this plane very smoothly," he said. "The conferees have all done an amazing job…it was really a great example of people working together to solve problems and to address what's important to the people of the state of Texas." 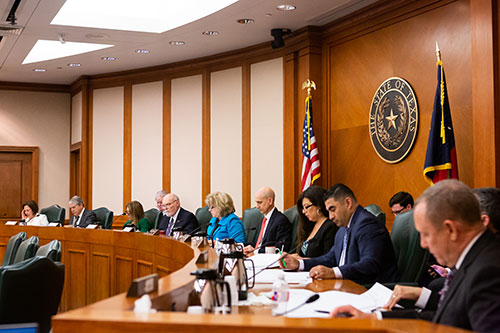 Following weeks of negotiations, members of the Senate Finance Committee and House Appropriations Committee agreed Wednesday on a final budget proposal to present to the full membership of each chamber.

Despite fears of budget cuts from the economic shock caused by the COVID-19 pandemic, state tax collections outpaced projections and the state looks to end the biennium with money in the bank and without significant cuts to state services through 2023. "The fact that we are sitting here today on the verge of passing a budget - a balanced budget - that meets our needs is a testament to the resiliency of Texas," said Nelson. Early revenue estimates from last summer were dire, forecasting a $5 billion dollar shortfall for the current biennium and uncertainty clouding the future. Things looked much better in January, but the state was still projected to end the current biennium just short of a billion dollars in the hole. As vaccinations increased and businesses opened back up, Texans wanted to go out and spend, leading to sales tax collections beating projections, including a record single-month total of $3.4 billion in sales tax revenue in April. At the beginning of May, state Comptroller Glenn Hegar told legislators that the state would end the 2020-2021 fiscal biennium in the black, with the $946 million projected shortfall transformed into a $725 million surplus. Hegar also increased projections for available revenue through 2023 by more than $3 billion in just state discretionary funds. Taking federal funds into account, the all-funds estimate was increased by $24 billion, thanks to the $1.9 trillion American Rescue Plan act passed by Congress in March.

The budget proposal approved Wednesday represents a slight increase in spending over the current biennium, but still within constitutional spending limits and below the rate of inflation, said Nelson. Importantly, the budget will fully fund the increases made to public education finance approved in 2019's sweeping education reform bill, HB 3. This has been a major concern for lawmakers throughout the session.

Next, the budget will head to the full House and full Senate for a final vote. "We will be bringing to the floor of both chambers a responsible budget that keeps Texas strong and successful," Nelson told members. In her three previous sessions as the chair of Finance, the Senate has overwhelmingly approved the final budget document, and with the economic picture looking much better than it did just a few months ago, it is likely to do so again. Once both chambers sign off on the conference committee report, it will head to Governor Greg Abbott for his approval.

There's still one major task left for House and Senate negotiators, and that's adopting the supplemental budget for the current biennium. Because state budgets in Texas are prospective, based on projections of earnings rather than actual earnings, each session lawmakers must balance how much they thought the state would take in two years ago versus how much it actually collected. The Senate Finance Committee is scheduled to take up that bill in a hearing Thursday.