(AUSTIN) — The Senate on Thursday concurred in House amendments to a bill that would make doctors liable for damages if they perform an abortion after a fetus has developed a heartbeat. SB 8, by Mineola Senator Bryan Hughes, would require doctors to attempt to detect a heartbeat in a fetus before performing the procedure and to stop if they do. Though it can vary, this typically can be detected around 6 weeks gestation. That is far sooner than the current standard set by Supreme Court precedent, which allows most abortion procedures up to 20 weeks. 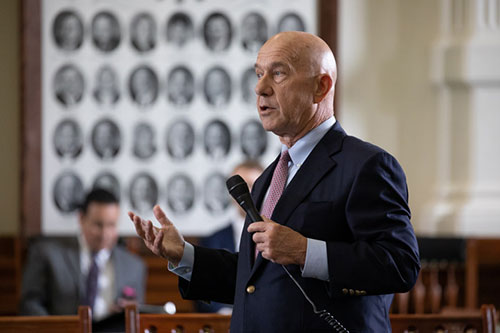 Hughes told members the amendments added in the House are consistent with the will of the Senate as it passed the bill. One change would narrow the focus of the bill. "When it got to the House, the concern was that it was much broader than just the heartbeat bill," said Hughes. "An amendment was put on in the House that would make it just apply to the heartbeat bill, but not the other pro-life laws in statute." Another amendment would lower the statute of limitations for seeking civil penalties from six to four years.

Because the Senate concurred in the changes, it will now head to the desk of Governor Greg Abbott for his signature. Texas will join ten other states which have passed similar legislation. All those bills are currently stayed by federal courts awaiting final dispensation before the Supreme Court. During floor arguments on the bill as it was passed out of the Senate in March, Hughes said he believed this bill will avoid court action because it permits only civil, rather than criminal or administrative penalties.

The Senate also granted the House's request to appoint a conference committee on HB 1927, the permitless carry bill. That means that five senators will join five representatives in resolving the differences between the House and Senate versions of the bill. The bill would allow Texans aged 21 or older, who can legally possess and carry handguns, to do so in public, holstered, without a license. Amendments added by the Senate would enhance penalties against felons and certain domestic violence offenders who carry illegally, among other changes. Once the conferees agree on a final bill, they will present it before each chamber for a final up-or-down vote.

Also Thursday, the Senate approved a measure that would end the practice of filming reality police TV shows in Texas, where video crews accompany peace officers on patrol as they enforce the law. Senate sponsor and Houston Senator John Whitmire told members that a number of suspects have been injured or even killed as the television cameras rolled. The most notable case, he said, involved the 2019 death of Javier Ambler II, who died after being pursued and tased by Williamson County sheriffs deputies who were accompanied by a television crew filming for a reality program. The incident was caught on tape, though the video never aired. The bill, HB 54, would still permit documentary filmmakers or journalists to ride along and take video footage of law enforcement agencies in the course of their duties, but these agencies would be forbidden from contracting with production companies for the purposes of creating reality TV programs. This bill will also head to the governor's desk.