(AUSTIN) — The Senate took time on Wednesday to recognize the contributions of three Texas Parks and Wildlife scientists who died on August 8, 2020 when the helicopter they in which they were traveling crashed in Brewster County. The deceased were State Wildlife Veterinarian Dr. Bob Dittmar, 64, Wildlife Biologist Dewey Stockbridge, 36, and Fish and Wildlife Technician Brandon White, 52. All three were praised as men who loved the outdoors and worked hard to ensure the preservation of the Texas wilderness for all to enjoy. Lubbock Senator Charles Perry said that when we lose a state employee, it's important to recognize their service to Texas. "We should always pause to take time to recognize the loss, acknowledge the contributions that they made to the state…to be able to inspire a legacy who come after them to carry on, and hopefully to be an encouragement to the families or those that they left behind that knew them, that they all were part of a bigger family: Parks and Wildlife, Texans, and God's family," he said. The crash occurred as the men were surveying herds of Bighorn sheep at the Black Gap Wildlife Management Area. 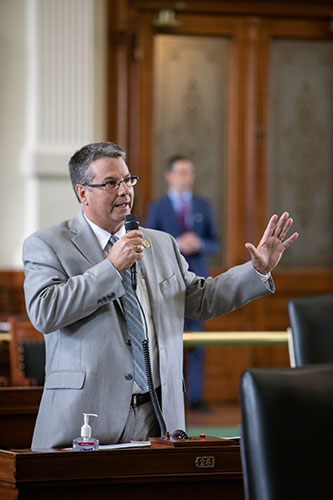 Senator Charles Perry of Lubbock and the rest of the Senate honored the life and work of three Texas Parks and Wildlife employees who died in a helicopter crash last year.

Each man was eulogized by the senators who represented them. First was Senator Dawn Buckingham of Lakeway, who remembered Dr. Dittmar as dedicated veterinarian both in his hometown of Kerrville and in west Texas, where he worked to protect and expand the state's population of Bighorn sheep. Buckingham told members that Dittmar was the very first Texas State Veterinarian, a position that allowed him to pursue his passion of Texas wildlife conservation. She remembered him for his commitment to his community and the state that he loved. Dittmar was also the long-time president of the Hill Country District Junior Livestock Show. "What he did for all of those children, and how important he knew all of that was for them, was amazing," said Buckingham. "The gift he gave them will last forever." Dittmar is survived by Bernadine, his wife of 41 years.

Next, San Antonio Senator Roland Gutierrez, whose Senate District 19 spans west Texas from San Antonio to El Paso, thanked the family of Dewey Stockbridge for the legacy left by their loved one. As the lead wildlife biologist at Elephant Mountain Wildlife Management Area south of Alpine, Stockbridge was instrumental in restoring Bighorn sheep and pronghorn antelope to their native range. The expansive preserve is also home to mule deer, coyotes, whiptail lizards, scaled quail, rattlesnakes, and spadefoot toads. "His office was 23,000 acres of wild trans-Pecos habitat where he helped manage and conserve the wildlife that called it home," said Gutierrez. He is survived by his wife, Shannon, and two children.

Finally, El Paso Senator César Blanco rose to remember his constituent, Brandon White. White was likewise posted at the Elephant Mountain WMA, working to preserve the native species of that region. A quintessential Texas renaissance man, White was a furniture maker, homebuilder, hotelier, and construction contractor before joining TPWD in 2016. "His passing is tragic," said Blanco. "Although his journey here on Earth ended way too soon, the memories of his generous nature, I think, are going to remain." White left behind a wife, Leti, and four children.

All three families were present in the Senate gallery as the body recognized their loved ones. In closing, Perry praised the men, along with all TPWD employees, for their tireless work in preserving the unique and vast Texas countryside. "It's not by accident that you can just about drop a fishing pole anywhere you go or go to any corner of this state, that you don't find something to hunt or shoot a picture of," he said. "That's because we have quality, dedicated individuals that are committed to making sure our wildlife legacy lives on."