(AUSTIN) — Healthcare providers would have to send a patient an itemized medical bill before they attempt to collect any money under a bill approved by the Senate on Tuesday. Bill author and Mineola Senator Bryan Hughes told members that medical billing is confusing and opaque. "If you don't have an itemized bill, you don't know what you're being charged," he said. "Even after you're told what you owe, you can't check and see if the charges are accurate, see if the right charges were billed, [or] if the right charges were recorded. "In addition to the cost of each procedure, medicine and provider, the itemization would have a plain language description of each procedure as well as the medical billing code the procedure was billed under. Current law permits patients to request such a bill, but the process can be time-consuming. 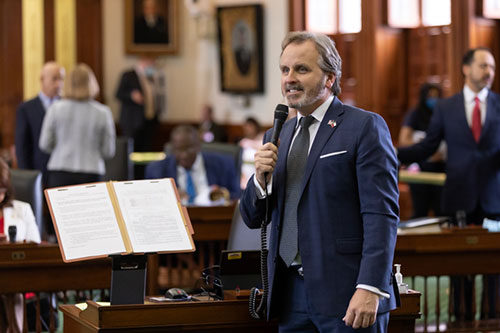 McAllen Senator Juan "Chuy" Hinojosa praised the bill, SB 2122. Complicated, impenetrable medical billing has become so bad, he said, that there are actually professionals who earn a living helping people decipher medical bills. "You know there is a cottage industry of people that will go over your hospital bill and try to find ways to reduce and identify those services that were not actually delivered, but which are being charged?" Hughes said that didn't surprise him. "How many times have you looked at a bill and you've wondered, 'I don't remember seeing that provider, who is that?'," he said. "It's a real problem."

This follows legislation passed into law last session intended to curtail the practice of surprise medical billing. Texans are increasingly receiving unexpected bills for medical services they thought were covered by insurance, sometimes as much as tens of thousands of dollars. Last session, Governor Greg Abbott signed into a law a bill by North Richland Hills Senator Kelly Hancock that removed the patient from that process entirely, requiring insurance companies to negotiate directly with providers when billing is in dispute. That law means that patients are only responsible for "expected" expenses - like co-pays and deductibles- outlined when they signed up for their health plan, and not the litany of out-of-network costs that often comprise these massive surprise bills. That law only applies to state-regulated health plans, meaning that many Texans still lack these protections.

The Senate passed another bill Tuesday relating to healthcare and insurance, one that would prohibit life insurance companies from discriminating against those who have donated an organ to another person. "Currently, life insurance companies are denying coverage or increasing premiums for life, disability, and long-term care insurance for living organ donors," said Houston Senator and bill sponsor Borris Miles. "This negatively affects past living organ donors and creates a disincentive for organ donors in the future." HB 317 was unamended in the Senate, so it will now head to Governor Greg Abbott's desk for his signature.

The Senate will reconvene Wednesday, May 12 at 11 a.m.