(AUSTIN) — Texans who can legally carry handguns could do so without a state license under a bill approved by a special Senate panel Thursday. Committee chair and bill sponsor Senator Charles Schwertner of Georgetown told members that the constitution is clear on the right to keep and bear arms. "HB 1927 recognizes the United States Constitution as our permit to carry", he said. "It allows all law-abiding adults to carry a handgun for the protection of themselves and their families." The bill would allow Texans at least 21 years of age, who are legally permitted to own a handgun, to carry that weapon on their person, in a holster, without a license from the state. Schwertner stressed that the bill would not change laws relating to possession of firearms nor would it change federal background check requirements. 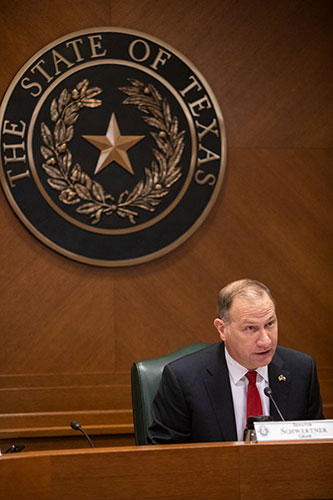 Senator Charles Schwertner of Georgetown chairs the Senate Special Committee on Constitutional Issues, which took up the issue of permitless carry of handguns on Thursday. Schwertner told members he intends to bring the bill to the Senate floor next week.

As members of the committee noted, Texans can already possess a gun in the home, carry in their vehicles, and openly carry a long gun without any requirement for licensing. "We already have permitless carry in how-many millions of vehicles in the state of Texas," said Granbury Senator Brian Birdwell. "In this sense, it expands permitless carry from your car to where you can lawfully carry outside your car." Twenty states have already passed permitless carry statutes to no ill-effect, said Van Zandt Senator Bob Hall. He argued that lawmakers can look to those states for assurances that this law won't lead to widespread violence. "Speculation about crime being increased has been answered," he said.

State law requires a license to carry a handgun, either concealed or openly. To obtain one, a Texan must be 21 years old and complete either a four-hour safety course, either online or in person with a licensed handgun instructor. Whether or not the course is completed in person, the applicant must pass a proficiency demonstration under the observation of an instructor. The fee for obtaining or renewing a license to carry is $40 for most Texans. Under the proposed bill, this system will remain in place for those who wish to obtain a license for the purposes of reciprocity with the 36 states that recognize a Texas license to carry.

Members skeptical of the bill raised concerns about those who aren't legally allowed to possess a firearm. "How are the police supposed to identify those folks if they all of a sudden now there's no licensing requirement," asked McAllen Senator Juan "Chuy" Hinojosa. "Most of the time the licensing requirement weeds them out." Proponents argued that criminals intending to use firearms in the commission of crimes aren't going to be stopped by laws prohibiting unlicensed carry. "We know those that use it irresponsibly to do harm don't care what laws are," said Muenster Senator Drew Springer. "They will violate the laws no matter what."

The committee approved the bill on a vote of 5-2, but it's not yet clear if the bill has the supporters required to bring up a bill on the Senate floor. Schwertner said he thinks it can get there. "A few short weeks ago it was suggested that there was insufficient support to pass a constitutional carry bill out of the Texas Senate this session," said Schwertner. "I personally refuse to accept that. I believe that if we are willing to listen to one another and work together to get the job done, we can pass the kind of strong constructional carry law that all Texans can be proud of." He laid out six amendments that he thinks will help build support for the measure. Those amendments would prohibit carrying while intoxicated, waive handgun license fees, enhance penalties for felons or domestic violence offenders who illegally carry firearms, ensure locations like polling places, hospitals or schools could still prohibit carry and create a free online gun safety course. The amendments weren't adopted by the committee, as Schwertner said he wanted them to be part of floor discussion related to the measure.

The Senate will reconvene Monday, May 3rd at 2 p.m.