(AUSTIN) — Members of the Senate Higher Education Committee considered a bill Wednesday that would significantly change the state's automatic college admission standard, commonly known as the "top ten" rule. As originally conceived, it guarantees students that graduate in the top ten percent of their class admission to the state college of their choice. Today's measure, offered by committee chair and Conroe Senator Brandon Creighton, would require schools to admit up to 30 percent of an incoming freshman class under the automatic admission rule. 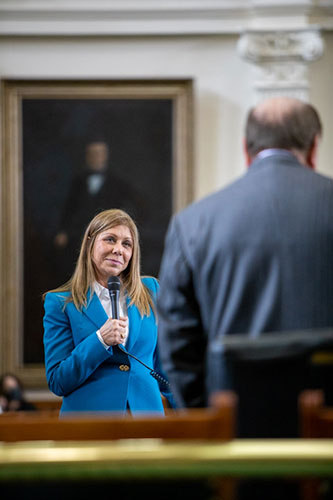 Houston Senator Joan Huffman received tentative approval for her plan to put the state employee pension fund on a path to solvency.

The original law was passed in 1997 in response to the Fifth Circuit Court of Appeals' Hopwood v. Texas decision forbidding institutions of higher education from using race as an admission criterion. The automatic admission rule was crafted as a race-blind way to offer a path to higher education for underrepresented African-American and Hispanic students, as well as students from small, rural high schools without the same access to resources as those in larger urban districts. Creighton told members it's unclear how much the law has contributed to that goal. "The Higher Education Coordinating Board has determined it's very difficult to distinguish the effect of the top ten percent rule from other policies, initiatives, and trends over the last 20 years," he said. Creighton said that it has also skewed the admissions process at the state's premiere universities, crowding out other qualified students that didn't rank as high in their graduating class. "Class rank is just one way to measure a student's potential, but sometimes it shouldn't be the sole or only deciding factor," he said.

This wouldn't be the first time the Legislature has limited admissions under the rule. Students admitted automatically have overwhelmingly chosen the University of Texas at Austin. By 2008, 81 percent of the incoming freshman class at that campus were admitted under the top ten rule, and projections forecast that class rank would make up the sole criteria for admission for all incoming freshmen by 2013. Lawmakers made a special exception for UT in 2009, requiring that the university admit up to 75 percent of students in a given freshman class automatically. Because the university was already beyond that, it effectively created a cap on the number of incoming freshmen admitted under top ten. Creighton's bill, SB 1091, would lower that requirement to 30 percent and apply it to all state universities. Currently, only five campuses, UT-Austin, Texas A&M, Texas State, Texas Tech and the University of North Texas, meet or exceed that threshold. According to university representatives, under the proposed 30 percent share, students who graduate in the top six percent of their class would be eligible for automatic admission to Texas A&M, and only the top two or three percent of graduating high school seniors would qualify for automatic admission to UT-Austin.

On the floor Wednesday, the Senate gave initial approval to Houston Senator Joan Huffman's plan to bring the state's employee pension fund back into solvency. SB 321 would accomplish this in two ways. First, it changes the benefit structure for employees hired after September 1, 2022, putting them on a cash-balance benefit plan, similar to a 401 (k), funded by a six percent salary contribution. Upon retirement, the state would match that fund at the same rates for current employees and use that amount to calculate a lifetime annuity for the retiree. Second, it would commit the state to a $510 million annual payment to pay off the Employee Retirement System's existing $14.7 billion unfunded liability by 2054. Though that's a significant amount, said Huffman, it will save the state $34 billion in interest over that 33 year time frame. She also noted that cost of living benefit increases for current retirees aren't permitted by law unless the pension fund is actuarially sound. "This is a good bill," she told colleagues. "It's a good for current workers, it's good for future workers, and it requires a great investment by the state of Texas into their employees." The bill will still need to face another, final vote, likely on Thursday.

The Senate will reconvene Thursday, April 29 at 8 a.m.