(AUSTIN) — The Senate Finance Committee on Monday gave unanimous approval to a bill intended to help protect Department of Public Safety troopers who are attacked in their vehicles as they patrol the state's highways. Since the department was originally commissioned as the Texas Rangers in 1823, DPS has seen 223 officers slain in the line of duty. The most recent was Chad Walker, who was shot to death through his cruiser windshield on March 26th when he pulled over to render aid to a vehicle parked on the side of the road. Just a few weeks later, Trooper Juan Tovar was also shot through his windshield, sustaining serious injury. "Unfortunately, our DPS officers are increasingly targeted by individuals wishing to do them harm," said Committee chair and Flower Mound Senator Jane Nelson. "Our troopers are most vulnerable while patrolling our highways, as we've seen with recent cases in which our troopers are ambushed in their vehicle." Her bill, SB 2222, would require the installation of bullet-resistant windshields in all DPS patrol vehicles. 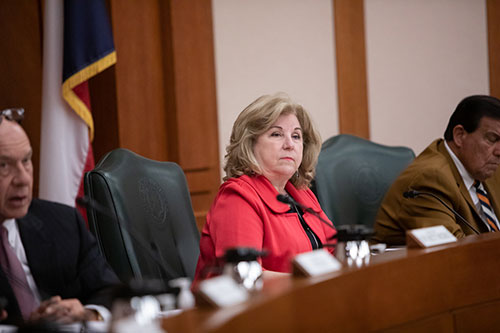 "Police officers are more targets today than they ever were," DPS Director Steve McCraw testified before the committee. "If you just look at the last two-and-a-half years, we've had a 500 percent increase in shootings at DPS officers." In the case of Trooper Chad Walker, McCraw said the officer was only looking to help what he thought was a stranded motorist. "Sometimes public safety - the most important thing you can do is change a flat tire or help somebody off the roadway. When Chad pulled up, he's there to do public assistance - a disabled vehicle," said McCraw. "The suspect had a .40-caliber at his side and he pointed and shot right in the windshield, directly into it...he didn't even have time to put [his vehicle] in park." Trooper Walker died five days later. Trooper Tovar was also shot through his windshield as he responded to an active shooting in Bryan on April 8. He survived, but lost his left eye in the attack.

There is no such thing as a bulletproof windshield, McCraw told committee members, just increasing levels of resistance that add more protection -and more time to react- in violent situations. "You shoot enough times into it, depending on the caliber, you're going to break through that particular glass," he said. "It gives us a window, an opportunity to survive, and be able to return [fire] or escape deadly fire." Resistance is graded on a scale from one to eight; McCraw says that his agency is looking at a resistance level around three. Any more than that, he says, the glass begins to add too much weight and the risk of an automobile accident becomes too high. "It can't be a tank," he said. "These are pursuit vehicles, we drive them over 100 miles an hour and crashes are fatal as well." Level 3 resistance, he said, would protect troopers from virtually all handgun calibers while not significantly degrading the drivability of DPS cruisers. Though they haven't yet solicited bids for the retrofit, McCraw says his agency estimates it will cost around $20 million to install these windshields in existing cruisers and another $5 million for upgrades to new DPS vehicles.

Committee vice-chair and Brownsville Senator Eddie Lucio, Jr. said that the Legislature is going to do what it takes to protect state troopers. "I think Senator Nelson spoke loud and clear," he said. "We're going to stand by our peace officers here in the state of Texas."

The next step for the bill is a vote of the full Senate, but as Lt. Governor Dan Patrick has cited the need for this bill from the dais several times this session, it should easily pass the body.