(AUSTIN) — Police officers who witness colleagues using illegal excessive force would be required to intervene under a bill approved without objection by the Senate on Thursday. Police accountability became one of the most hotly debated issues in the nation last year after the death of George Floyd in Minneapolis caused by the use of excessive force by police. Bystander video showed Officer Derek Chauvin kneeling on Floyd's neck for nine minutes, an act for which he was convicted of second-degree murder on Tuesday. Houston Senator Borris Miles told colleagues that if a law like the one proposed in his bill, SB 68, were in effect then, Floyd might still be alive today. "When you look at the film, there were numerous officers standing around, but not one of them thought to intervene with their fellow police officer," he said. 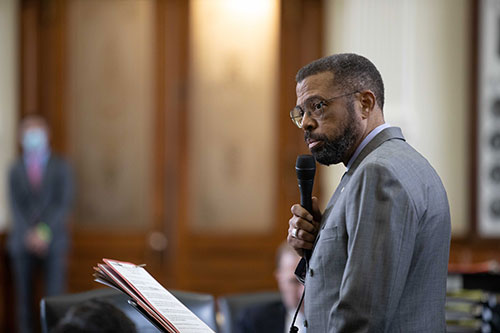 Not only would officers be required to intervene in the moment if they see illegal and excessive force being used, but they would also have to file a report with the appropriate supervisor. "Officers sometimes do not intervene when they witness misconduct because they may be fearful of retaliation from their fellow officers, and we understand that," said Miles. "But that's not acceptable."

Dallas Senator Royce West told members that while issues surrounding police reform are controversial, they must be faced. "Whether we sympathize, are angered by, or want them all to go away or ignore these topics of today related to criminal justice, police reform and social justice, we must acknowledge their presence and realize they're unlikely to move from public discourse any time soon," he said. "It takes our law enforcement and also members of the advocacy communities to work together and figure out exactly what can be agreed upon." West offered a bill, SB 2212, that would require a peace officer to request emergency aid when they come across an injured individual during the course of their official duties. Officers would also be required to render first aid, commensurate with their level of training, provided doing so would not place the officer or others in danger. West said that requiring such actions reaffirms the role of police officers as public servants and represents a consensus step forward in improving police accountability.

Miles and West thanked their colleagues for their unanimous support of this issue. "We all know what happened, we all know what took place, but I can assure you my brothers, the leadership in this state is not going to stand by," said Miles.

Also Thursday, the Senate approved a bill that would open the door for college athletes to profit from their on-field performance. Senator Brandon Creighton of Conroe told colleagues he was initially opposed to such legislation, but he recognizes that compensation for college athletes has become inevitable. "The question, members, is no longer if, but when student athletes will be allowed to earn compensation from their name, image and likeness," he said. Eight states have already passed such legislation and 30 more are considering it. Laws in Alabama and Florida go into effect this summer, and Creighton says he doesn't want to see the cream of Texas high school athletics leave because other states offer the promise of remuneration. "If Texas waits another two years to address the issue, we will see hundreds of Texas' best high school athletes potentially choose to take their talent to other states," he said.

The bill, SB 1385, restricts student-athletes from accepting contracts as a recruiting perk and prohibits athletes from endorsing certain products or services, like tobacco, alcohol or sports betting. If passed by the House and signed by the governor, the law would go into effect on September 1st of this year.

The Senate will reconvene Monday, April 26 at 4 p.m.