(AUSTIN) — The Senate Higher Education Committee on Wednesday took up a bill that would temporarily freeze tuition at state colleges and universities at current levels. Since tuition deregulation passed the Legislature in 2003, the state Higher Education Coordinating Board says that the price of college has risen by 66 percent, increasing student debt and pricing lower income families out of post-secondary education. SB 167, by El Paso Senator César Blanco, would allow institutions of higher education to only raise tuition at the rate of inflation, as determined by the prior year's consumer price index. The cap would expire in five years, at which time lawmakers could extend it or take other steps to control tuition rates. 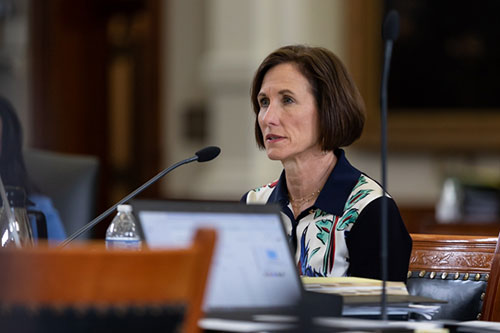 The bill would affect some institutions more than others. Coordinating Board data shows that since 2013, some schools have had no or very modest increases in tuition, while others have seen prices increase by more than half. On average, tuition at state public universities has increased by 39 percent, compared with an increase in the cost of living over that same time period of 12 percent.

Also Wednesday, the Senate Health and Human Services Committee looked at stemming increasing monopolization in the pharmacy business, a trend that committee chair and Brenham Senator Lois Kolkhorst said is squeezing independent local pharmacies and even statewide chains. At issue are what are called pharmacy benefit managers (PBMs). These are third-party companies - often owned by insurance firms - that administer prescription plans. Kolkhorst told members that three companies now control 80 percent of the market, they use that leverage to create onerous requirements for independent pharmacies, and direct customers to dispensary services also owned by those same companies. She added that PBMs now make up seventeen percent of all healthcare spending, far more than was ever intended.

A particular problem with the current system, according to witness testimony, involves what are called specialty drugs. These tend to be expensive drugs used to treat chronic health conditions and are a big driver in the growing cost of healthcare, making up only one percent of prescribed medicines but accounting for nearly half of all pharmaceutical spending. Health insurance companies are increasingly requiring that these drugs be purchased from accredited pharmacies: pharmacies which are often owned by the insurance companies themselves. These accreditations are both expensive and unnecessary, according to Dr. Ben McNabb who operates a small-town pharmacy in Eastland and appeared on behalf of the Texas Pharmacy Association. "PBMs use these obstacles to steer patients to mail-order specialty pharmacies that they themselves own," he said. "[They] claim these accreditations are needed to protect patient safety, but the Texas State Board of Pharmacy, which is charged with protecting patients, doesn't have any special restrictions or requirements on dispensing specialty drugs." He said that one widely applied accreditation can cost as much as $100,000 per year. McNabb said that it seems the main criteria for what qualifies for a specialty drug is the price. "It's very ill-defined what a specialty drug is and a lot of the time, it seems to correlate with how much the drug costs," he said.

"Now you have to be a specialty pharmacy to dispense these drugs, and the people who are making those rules are the PBMs that own those pharmacies - I think we have a problem," said Kolkhorst. Her bill, SB 2195, seeks to preserve patient choice by removing PBM authority to restrict purchases of specialty drugs to accredited pharmacies beyond what is required by state regulations. The bill also prohibits "clawbacks" where pharmacies find themselves on the hook for thousands after PBMs alter the price of a medicine, often weeks or months after the initial transaction. "This is more about levelling the playing field for independent pharmacists versus the PBMs," she said.

The Senate will reconvene Thursday, April 22 at 10 a.m.