(AUSTIN) — Parents would have expanded options to choose virtual instruction for their children under a bill considered in the Senate Education Committee on Thursday. Committee chair and Friendswood Senator Larry Taylor said that while the vast majority of students do better under traditional, in-person instruction, the switch to virtual learning during the pandemic worked better for some students. "For some of our students, they really did well in that environment," said Taylor. "We need to give those students that opportunity to learn in the way that's best for them." His bill, SB 27, would seek to expand the state's existing virtual school program, giving all school districts discretion to open and operate a virtual campus. 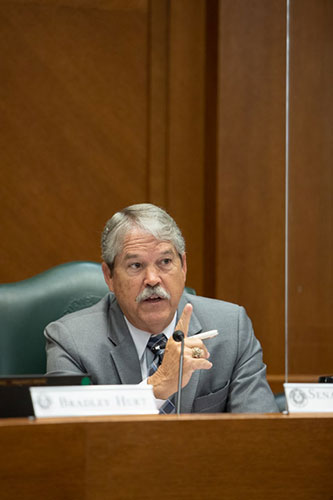 While most kids do much better in the classroom, Senator Larry Taylor of Friendswood wants to offer the option of virtual learning to all parents who believe it works better for their children.

When the governor ordered Texas public schools closed in March of 2020 in order to help halt the spread of the COVID-19 pandemic, schools were left scrambling to implement virtual learning programs with almost no lead time. Lots of districts tried different things, and while the results were, at best, mixed, Taylor said the state learned a lot about what works and what doesn't. "We just experienced every district in the state providing some virtual," said Taylor. "Some weren't ready for it, some did an incredible job, and I think we need to continue that…COVID is a terrible experience but we need to learn a few things that were positive from that and take those forward." His bill would try and implement some of those best practices.

The measure would let any school district, institute of higher education or charter school to open and operate a virtual school campus and would allow districts to decide whether to restrict enrollment to local students or students anywhere in Texas. Schools could choose whether to offer full-time or part-time instruction, and programs could serve students at any grade level. For accountability purposes, these virtual campuses would receive the same ratings as a brick-and-mortar school, and would affect the overall accountability rating for the districts. "We want to make sure these students are getting a good, quality education," said Taylor. "This is not some way of sneaking by with a sub-standard education." It would permit both synchronous, or real-time, and asynchronous instruction that students can access on their own schedule, which Taylor said would give families flexibility to chose what works best for their children. As far as ensuring students' attention, virtual programs would have to establish an engagement policy that maintains participation and students would have to return to in-person instruction if attention problems persist.

Some members were skeptical of virtual schooling given their experience with their own kids during the pandemic. "My oldest son was finishing high school as this started and it became a joke, really," said Georgetown Senator Charles Schwertner. "The implementation of it for various types of populations of students with special needs, seems to be a pretty big undertaking. Finally, the issue of just the social structure and development socially of children when they are interacting amongst themselves is an important thing." Taylor said that many problems with virtual learning during the pandemic came from what was necessarily a hasty implementation. He compared the virtual education system implemented in the face of an exploding health crises to a battlefield triage tent, whereas the plan envisioned under the bill would be more akin to a hospital. "This is going to be more thought out - people who have worked through the process...this is for kids that are fully engaged who actually do better in this environment than face-to-face," said Taylor. "This is not going to be a continuation of what our so many of our students unfortunately had to face during COVID."

SB 27 remains pending before the committee.

The Senate will reconvene Monday, April 19 at 2 p.m.