(AUSTIN) — In their ongoing effort to ensure that the blackouts caused by the February ice storm never happen again, the Senate on Wednesday moved forward with a bill aimed at reform of the board of the organization that manages the state grid and another intended to add more stability in generation capacity. The first measure, SB 2 by North Richland Hills Senator Kelly Hancock, would overhaul the makeup of the sixteen member board of the Electric Reliability Council of Texas, setting new requirements for membership and giving the Senate oversight on some of the membership. ERCOT board is composed of members representing all sectors of the energy market in Texas and five unaffiliated members who are intended to offer balance to the panel. As attention turned to ERCOT following the winter storm, many were shocked to learn that all five of these members lived outside of Texas - one even lived in another country. All five resigned just days after the lights came back on. 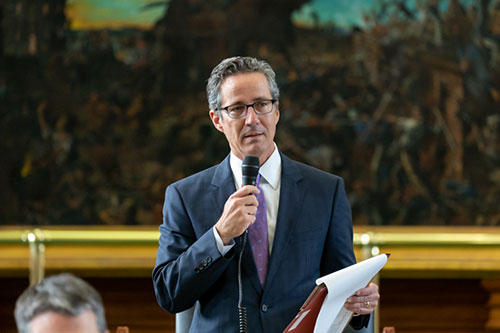 Senator Kelly Hancock of North Richland Hills moved forward on two major pieces in the Senate's plan to reform the state's electric grid and prevent a repeat of the February blackouts.

SB 2 would require that all members of the board live within the state of Texas. "ERCOT board members should know that their decisions directly impact electric reliability in their own homes and their own communities," Hancock told colleagues. It would also require all five of these unaffiliated members, along with the chairman of the board of directors, be appointed by the governor and approved by the Senate. Under current law, the ERCOT board selects its own candidates for seats, but since the five members who left created an imbalance in favor of industry, Hancock said giving that power to the governor and Legislature will ensure that those members are truly impartial and the board remains balanced. It also gives a seat to the Office of Public Utility Council, which is intended to give consumers a voice on that board. Finally, the bill would require that any major changes to policy intended by the board be first approved by the state Public Utility Commission.

The second bill, SB 1278, also by Hancock, would require intermittent generators, like wind and solar farms, to purchase backup capacity from dispatchable sources like thermal generators or battery stores. Intermittent generators depend on good weather conditions to generate power: sunny skies for solar and winds strong enough to turn turbines. Dispatchable generation - like natural gas, coal, and nuclear plants - runs as long as it has fuel. No source of generation was spared by the February storm as snow covered solar panels, turbines froze, and fuel lines ran empty, resulting in a loss of nearly half of the state’s total generation capacity, but thermal generation that can be switched on as demand rises is generally seen as more reliable than sources that depend on weather conditions. As wind and solar have become a larger part of the Texas energy portfolio, it's injected a degree of uncertainty into the reliability of the Texas power grid, said Hancock. "I love wind and I love solar," he said. "For ten years we have grown dramatically in wind, we've grown dramatically in solar, and we need to balance that out to make sure we have that dispatchable capacity." His bill would require intermittent generators to purchase enough reserve electricity to account for their own generation variability and deliver on the megawatts they offered to the grid. "Dependence on those resources has been a long term reliability issue," said Hancock. "SB 1278 is a significant step toward a long term solution, which is requiring inconsistent resources to pay for the services to back up their performance."

Conservation warnings from ERCOT this week caused by higher-than-expected temperatures during scheduled plant maintenance has again emphasized the need to shore up the state’s electric grid. Though generators were able to meet demand without interruptions in service, it demonstrates that this problem isn’t fixed yet. “This week's conservation alert reinforces the fact that Texans need and deserve a comprehensive legislative response that keeps our eye on the main goal: real reliability,” said Hancock. “We can’t afford to get this wrong. The bills we passed today are key components of a long-term fix that balances out the Texas electric market and guarantees new generation.”

The Senate will reconvene Thursday, April 15 at 10 a.m.