(AUSTIN) — The Senate on Tuesday approved legislation that would bring legislators back into Austin in the event of a major, long-term disaster that occurs during the 19 months between legislative sessions. The COVID-19 pandemic struck the state right in the middle of the last interim, and many lawmakers expressed frustration at having no input into the state's response to the pandemic. Governor Greg Abbott's pandemic response has faced mixed reaction from the public, with those who say his orders closing businesses and limiting gatherings went too far, while others said he didn't do enough to prevent the spread of the disease. Bill author and Granbury Senator Brian Birdwell said that, as the branch of the government most representative of the will of the people, the Legislature must participate during a disaster even if it is not in session. "Because the legislative branch, by design, is the most representative proxy for the will of the people, if the events of the last year are viewed in the light of this principle, if follows that the people's will was generally silenced during some of the most turbulent trials our state has endured in recent history," said Birdwell. 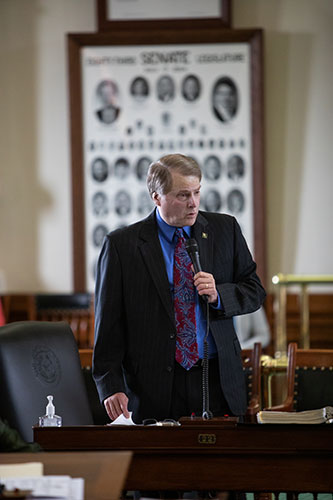 Granbury Senator Brian Birdwell believes that as the voice of the people, the Legislature must be called into session when an emergency declaration affecting significant portions of the state exceeds 30 days.

Birdwell wanted to make clear that the issue was with the law, not with the governor's response. "Governor Abbott acted clearly within the letter of the law, and further the governor demonstrated a sincere desire to protect his fellow Texans while coordinating a well-organized response to a largely unprecedented asymmetric disaster and unfamiliar operating environment," he said. "I for one appreciate his leadership in this trying time." He believes, however, that legislators, as the representatives of the people, must have a role in large scale disasters affecting millions of Texans.

The problem, said Birdwell, is that the law makes no distinction between a limited, local disaster like a tornado in a single county and a category five hurricane that smashes the Gulf coast. His bill would create criteria under which the governor must call lawmakers back into session. First, the disaster declaration must persist for at least 30 days, or 90 days in the case of a radiological disaster. Next, the declaration must meet one of the three following criteria: it affects half of the state's population, it affects two-fifths of the state's 254 counties or two-thirds of the counties in three of the state's 22 trauma service areas. Once in Austin, the Legislature would get a say on how the executive branch is managing the disaster. "This may entail complete concurrence with the governor's assessments and actions or flatly terminating the declaration, or, more likely, anything in between," said Birdwell. The legislation would let the governor retain most of his or her power to suspend parts of the state penal and election code for thirty days, but that would become the purview of the Legislature afterward. It would restrict the governor's power to place limits, either categorically or regionally, on operations or occupancy of businesses, requiring him or her to call the Legislature into session in order to make such decisions.

If the governor does not call a special disaster session after the criteria set forth under this legislation is met, it would allow a member of the legislature to seek relief from the Supreme Court of Texas, who could order that a session be called.

Also Tuesday, the Senate gave approval to a bill that would prohibit cities from cutting police budgets without voter approval. SB 23, by Houston Senator Joan Huffman, would allow the comptroller to prevent cities that cut law enforcement without that approval from raising property taxes until funding is restored. In lean years when cities are looking at across-the-board cuts, the bill would permit city councils to reduce police spending by the same proportion as other areas of the budget. It would also suspend this requirement for up to two years if a city experiences an officially declared disaster, in order to give city leaders flexibility to allocate resources to disaster relief.

The Senate will reconvene Wednesday, April 14 at 1 p.m.