(AUSTIN) — The Senate Nominations Committee gave its full support to the governor's first nominee to fill a seat on the vacant Public Utility Commission on Monday. Will McAdams, if approved by the full Senate, would become the newest, and only member of the three-member commission, following the resignation of all three former commissioners in the wake of the February ice storm that led to millions losing power for days. McAdams told senators that his number one goal is re-establishing public faith in the PUC. "Restoring the trust and confidence of the public in our ability to govern and regulate our essential services absolutely must be the number one priority for any commissioner," he said. 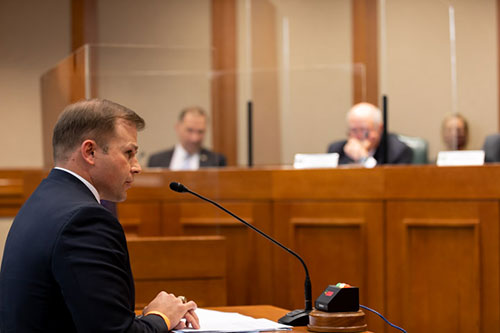 If approved by the full Senate next week, Will McAdams will serve on the state Public Utility Commission. He received unanimous support Monday from the Senate Nominations Committee.

McAdams is no stranger to legislators, having served in a number of senior staff positions, including legislative director for Georgetown Senator Charles Schwertner, committee director for the Business and Commerce Committee under North Richland Hills Senator Kelly Hancock, and most recently as a senior policy advisor for former House Speaker Dennis Bonnen. This has given him expertise that will serve him well as a member of the state's chief energy regulator, Schwertner told the committee. "Will is a fair and thoughtful and generous and discerning individual, I think he is going to serve our state well in his capacity as a PUC Commissioner," he told senators on the Nominations committee. Hancock also appeared before the committee to praise the nominee. "Will McAdams is a man of integrity," he said. "I'm very pleased, I thought the appointment was a very wise appointment by the governor." If approved by the Senate, McAdams’ term would run until September 1, 2025.

Contradicting some of his predecessors, McAdams told members Monday that the PUC's authority to oversee the operations of the Electric Reliability Council of Texas, that industry organization that manages the state's deregulated power grid and electric market, are absolute. "It is my belief that the commission has been held, under state policy, as the ultimate regulator of our electric services and of ERCOT," he said. "I believe any assertion counter to this helps to undermine confidence in the system." McAdams went on to say that the PUC doesn't have unlimited authority, and that the legislature holds the sole power to make policy and any policy made by the commission must be within those boundaries defined by lawmakers.

Another major issue surrounding the grid failure was a decision by the PUC and ERCOT to peg the price of a megawatt of electricity at the statutory cap, $9,000 per megawatt-hour, for 32 hours - resulting in what an independent market monitor identified as billions of dollars in overcharges to retail electric providers. When asked how he would've handled the situation, McAdams wasn't eager to play armchair quarterback. "It is my belief that the PUC, the commissioners, had access to data that I am not privy to. Otherwise, I can't see what the objective was at holding at that level during the duration of question," he said. "Ultimately, I don't see myself making that decision with the facts that I have now." McAdams also said he agreed with the attorney general's opinion that the PUC had the authority to order ERCOT to reverse those overcharges within the 30-day contract term.

Despite his warm rapport with members and unanimous vote, Senators did warn McAdams that they expect to see reforms under his leadership. "I hope you see yourself as a change agent, because as Texans have seen, we've got a lot of problems," said Houston Senator Borris Miles. "I hope that you're not afraid to lead the change with the thought that the consumers are our main priorities." McAdams told members that he understands lawmakers' expectations for the commission. "It is clear to me that the Legislature wants meaningful changes to the status quo to ensure that something positive comes out of this tragedy,” he said. "We must learn from our mistakes and move forward." McAdams will likely see a final confirmatory vote in front of the full Senate next week.

The Senate will reconvene Tuesday, April 13 at 12 p.m.