(AUSTIN) — Venues that receive state funds would have to play the national anthem before all sporting events under a bill passed by the Senate on Thursday. Arising as a response to the Dallas Mavericks skipping the anthem before games at the beginning of the NBA season, the bill would consider failure to play the pre-game anthem as a breach of contract. That could mean a loss of funds or other penalties assessed due to a default. Senate Bill 4 author Senator Dawn Buckingham of Lakeway said this is one small way to show appreciation for those who serve the country. "The least we can do for our brave men and women who have died fighting for our great country and for those who are actively defending our freedom is to have our national anthem played before sporting events, which would not be possible without them," she said. 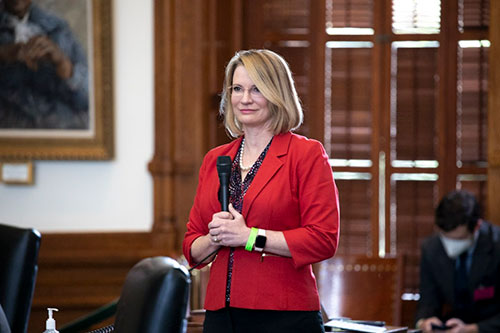 The measure drew broad support. Granbury Senator Brian Birdwell, a retired US Army Colonel who was gravely wounded in the attack on the Pentagon on 9/11, gave a passionate speech in favor of the bill, emphasizing what hearing that song means to those who have served. "That is why, members, this bill is so important. Not because of our football games, but to remember those who have endured the abuse, the rigor, the danger, and the potential for death that they have endured for the survival of this nation," he said. "That's why, ladies and gentlemen, this is not about sporting events, it's about honoring what makes this country great."

Also Thursday, the Senate approved a bill that would provide liability protection for first responders, medical providers, and business owners against lawsuits arising from the COVID-19 pandemic. Bill author and North Richland Hills Senator Kelly Hancock told members that this bill, SB 6, will help the state continue to re-open safely and help get the economy on track by protecting people acting in good faith from frivolous lawsuits. "[It] supports the heroes that have been on the front lines fighting this pandemic from the beginning with supplies non-existent and the effects still unknown," he said. He said that this bill isn't intended to shield negligent or malicious actors. "This is not an immunity bill," said Hancock.

With exceptions for reckless action or willful misconduct, this bill would prevent first responders or medical workers sued for injuries or death arising from "care, treatment, or failure to provide care or treatment" to individuals with a pandemic disease, such as COVID-19. Business owners who are following local mitigation protocols would be also be protected from such lawsuits. The bill does not protect businesses that knowingly disregard lawful mitigation protocols. "We're not looking to protect the bad actors in industry," said Hancock. "We want to protect those who are doing things right, doing things properly." The bill would apply retroactively to the beginning of the pandemic.