(AUSTIN) — The Senate Business and Commerce Committee heard testimony on a bill that would increase oversight for the independent organization that runs the state power grid. The Electric Reliability Council of Texas (ERCOT) manages both the operation of the electric system and the market where generators and distributors buy and sell electricity. The actions of ERCOT during the February storm have been under a legislative microscope as lawmakers try to determine what caused the days-long power outage that left millions of Texans without electricity and water during one of the longest hard freezes ever seen in the state. 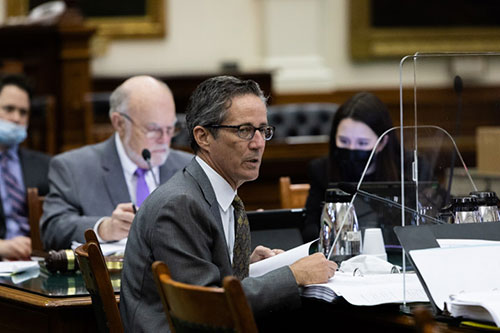 Senator Kelly Hancock of North Richland Hills offered a bill before the Business and Commerce committee aimed at increasing oversight over the independent organization that operates the state power grid.

ERCOT officials faced criticism for failing to adequately warn elected officials and the public about the danger of the approaching storm and the possibility of days without power. ERCOT operators called for large scale blackouts as the crisis began in order to prevent a total collapse of the power grid that could've left the state without power for weeks. ERCOT officials made the call to keep electricity prices at their statutory maximum for 30 hours after the crisis had passed, an action one independent market monitor says led to billions in electric overcharges.

In the days following the storm, several members of the ERCOT board, none of whom lived in Texas, tendered their resignations. All three members of the Public Utility Commission, the state regulator charged with ERCOT oversight, have since resigned. The Senate has already passed legislation reforming the PUC board and addressing electric overcharges; the bill considered Tuesday would make changes to the selection and makeup of members of the ERCOT board.

SB 2, by North Richland Hills Senator and Business and Commerce Committee chair Kelly Hancock, would require that all ERCOT board members live in Texas. "The ERCOT grid is unique in its energy-only market structure, and qualified utility professionals that understand this market should be the ones considering the changes to market protocols and issues before the board," said Hancock. "It kind of helps if they live within those areas." Under SB 2 the governor would appoint - and the Senate would confirm - the ERCOT board chairman. It would also require PUC approval of any major changes to protocols or procedures.

Hancock told members he is considering additional reforms to add to SB 2, but wanted more input from stakeholders before offering a revised bill.

Also Tuesday, the Senate Finance Committee unanimously approved its proposal for state spending through 2023. Committee chair and Flower Mound Senator Jane Nelson told members that despite the challenges the state faced through the COVID-19 pandemic, smart fiscal policy has left it in good shape going forward. "Because we have practiced fiscal responsibility over the years, Texas is better equipped than any other state to overcome these challenges," she said. "It is a testament to our resilience that we are bringing forward a balanced budget that will keep Texas safe, strong, healthy and prosperous." The Senate's budget maintains increased funding for public education passed in 2019 and allocates $250 billion in both state and federal money.

There are billions more in federal money on the way as part of federal COVID relief passed in early March, but Nelson said last week that it was unlikely to arrive before the Legislature adjourns on May 31st. She said Tuesday that she's working with her House counterpart, Appropriations Chair Greg Bonnen of Friendswood, on legislation to ensure that lawmakers have a say in how this money is allocated when they aren't in session. Nelson told members she hopes to bring the bill to the floor for consideration by the full Senate next Tuesday.

The Senate will reconvene Wednesday, March 31 at 1 p.m.