(AUSTIN) — Energy companies would be required to weatherize critical facilities or face steep fines under a bill passed without objection by the Senate on Monday. The bill, SB 3 by Georgetown Senator Charles Schwertner, would implement a number of reforms to the state wholesale and retail electric market that are intended to prevent a days-long power outage as occurred in February. A recent survey from the University of Houston's Hobby School found that more than two-thirds of Texans on the state grid say they lost power for at least 30 hours during that week. The state announced last week that one hundred and eleven people are known to have died from causes related to the storm. Schwertner told members that, unlike past legislative efforts, this bill includes meaningful reform intended to prevent a grid collapse from ever happening again. "This is an issue that is serious to us, that we take control of, and responsibility for - and one that we're going to see to the end," he said. 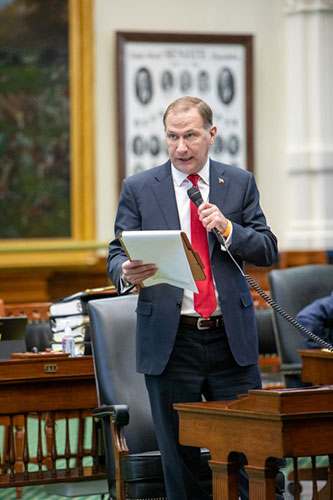 The bill would require that electric, natural gas and other energy companies harden their facilities to protect them from a storm of the magnitude the state faced in February. Companies found not to have complied or acted in good faith could face escalating penalties, ranging from a simple letter of reprimand all the way up to a one million dollar fine, per violation, per day.

The bill also seeks to improve communication between energy regulators and the public when a long-term power outage is possible. The UH survey found that 81 percent of Texans believed they didn't receive timely and accurate information before, during and after the outages. "We have weather alerts, we have hurricane alerts, we have Amber alerts," said Schwertner. "This puts in place a 'power outage alert' which will essentially do the same thing, regarding alerting citizens that they need to take precautions: water, food, fuel up, basic things that would've helped a lot of individuals out if they had known they were going to be without power for four days." The bill would direct the Public Utility Commission to create this statewide power outage alert network and develop criteria under which it would be used.

Another major issue raised during investigations into the power outage was the exorbitant prices charged to electric providers when regulators raised the wholesale price of electricity to its statutory cap of $9,000 for more than 30 hours, leading to billions in overcharges. SB 3 would permit that high cap to remain but directs regulators to develop an alternative cap based on market conditions. After 12 hours at the statutory cap, should regulators determine that cap pricing continue, it then moves to that lesser, market-sensitive cap.

There's more grid reform to come, according to Lt. Governor Dan Patrick. "The work is just beginning…but this is a great first step," he said. The measure will now head to the House for consideration.

Also Monday, the Senate gave initial approval to SB 8, which would prohibit abortions after a fetal heartbeat is detected. According to bill author and Mineola Senator Bryan Hughes, a heartbeat is proof of human life. "When there's a heartbeat present, the state of Texas is saying that's a human being deserving of protection," he said. "We're going to protect that life." Though the bill doesn't set a specific date after which abortions are restricted, fetal heartbeats are typically detected around the sixth week of pregnancy. Current US law generally allows abortions until 20 weeks. Texas would join eleven other states in passing a "heartbeat bill". All those laws have been enjoined by federal courts, but Hughes said that he thinks this bill will pass constitutional muster because it applies civil, rather than criminal or administrative penalties. The bill will face one more vote before it heads to the House.

The Senate will reconvene Tuesday, March 30 at 1 p.m.