(AUSTIN) — As part of its efforts to reform the state's electric market this session, the Senate on Thursday passed a bill that would change the makeup of the commission charged with overseeing utilities in the state. All three members of the Public Utility Commission resigned in the weeks following the February ice storm that left millions of Texans without power. Senator Charles Schwertner of Georgetown told members that the next set of commissioners have to be better. "We all know that reform is necessary at the PUC," he said. "We need strong leaders, we need individuals that have common sense and that are representing and looking after the best interests of Texans." 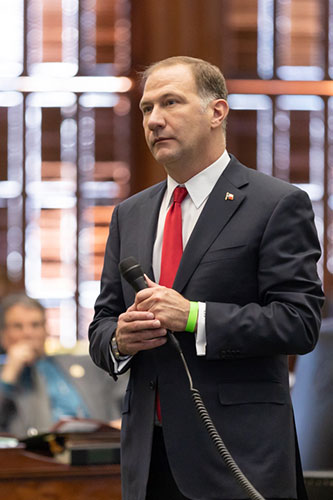 Senator Charles Schwertner of Georgetown passed a bill through the Senate on Thursday that would make a number of changes to the makeup of the board of the state's chief utility regulator.

His bill, SB 2154, would increase the membership of the commission from three to five and give the governor 30 days to appoint a new commission chair upon passage of the bill. It also expands the requirements for membership to allow for industry experts, attorneys, engineers or accountants to serve as commissioners, rather than simply those "well informed and qualified in the field of public utilities and utility regulation" as exists in current law. Commissioners would also have to be current residents of the state of Texas. Houston Senator Paul Bettencourt applauded the bill, saying it will ensure the PUC better represents all areas of the state. "I think five members is a minimum allotment to get some regionality in the state, as well as some diversity of background and thought in what is an extremely important commission," he said.

Schwertner called SB 2154 a "small step" on the road to meaningful reform. He presented a much larger effort before the Senate Jurisprudence Committee on Thursday in the form of SB 3, the Senate's comprehensive electric utility reform bill for the session. Schwertner told members that he's found the industry ready and willing to work with lawmakers. "I was also pleased with the many energy stakeholders who have committed to making real reforms, to ensure that this never happens in Texas again," he said. This bill would require energy companies to winterize facilities, avoiding the equipment failures and fuel shortages behind much of the loss of capacity in February. It would create an escalating set of penalties for companies that don't act in good faith, ranging from a letter of reprimand all the way up to a fine of one million dollars per day.

In hearings on the ice storm power crisis, one issue that repeatedly surfaced was one of communication on the part of state regulators. Senators told agency representatives they did not do enough to warn people of the magnitude of the storm and the potential length of the blackouts. SB 3 would require state emergency management officials to categorize winter storms by severity, as is done with hurricanes, and would create a statewide alert system to ensure citizens can properly prepare for future severe winter weather events.

Another major issue raised in recent weeks are billions in overcharges caused when the Electric Reliability Council of Texas (ERCOT) moved the price of a megawatt of electricity to its statutory cap, $9,000. Industry watchdogs told members at one oversight hearing that while the move to the cap was justified when ERCOT was trying to increase supply and decrease demand, it erred when they kept the price there for a day and a half. They said once the supply emergency had passed in the wee hours of February 18th, the agency should've floated the price and let it respond to market supply and demand. Instead, it was kept there for more than 30 hours, leading to between four and five billion dollars in overcharges to utility companies, plunging some into dire financial straits and even bankruptcy. SB 3 would only permit ERCOT to keep the price at the cap for 12 hours. It would also require the commission to develop an alternate, emergency price cap based on the actual cost of generation. The committee unanimously approved the bill and sent it on to the full Senate for consideration.

The Senate will reconvene Monday, March 29th at 11 a.m.