(AUSTIN) — Texas has received billions in federal aid related to the COVID-19 pandemic and could receive billions more in the coming weeks, but Senate Finance Committee Chair and Flower Mound Senator Jane Nelson told members of her committee Wednesday that there are still more questions than answers regarding the aid package created through the American Rescue Plan Act (ARPA). "There are so many misconceptions out there," she told members. "We're still working through the guidance on federal funds that were approved during the previous administration, we're just starting that process for the dollars that will be coming to Texas under [ARPA]." 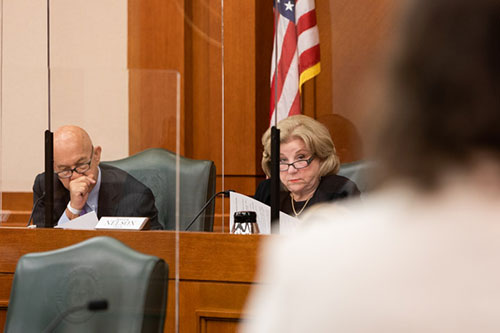 Again the panel turned to Sarah Hicks, the director for policy and budget at the Office of the Governor, for clarification. Hicks previously appeared before the committee in February to help explain how the $8 billion the state of Texas received through the federal CARES coronavirus relief act was spent over the past year. Through ARPA, the state expects to receive even more, around $16.7 billion, but it's not clear when it will get here or how it can be spent, said Hicks. "There's still more unknowns than knowns," she said. "We're still waiting for a lot of guidance." She said there are two important restrictions on spending in the bill: aid money cannot be spent to lower tax rates, and it cannot go to shore up pension funds. Aid money can only go to pay for "COVID-related" expenses, but Hicks said what is and isn't COVID-related isn't straightforward.

Though millions of eligible Americans have already received stimulus checks and tax credits allocated through ARPA, it's going to take longer for the state aid to arrive, Hicks told the committee. The federal government is still working on guidance for states on how to spend the aid funds. Once that's done, states can certify that they agree to those limitations and then the Department of the Treasury has up to sixty days to disburse the money. "I don't know if it will take one day or sixty days, but that’s how long the Treasury Department has," Hicks told the committee. Nelson mused that this could mean that federal aid money doesn't arrive until the session ends on May 31st, well after the state budget would be passed by the legislature and signed by the governor. It could be even longer than that as the law allows for the payment to be split into two parts, permitting the Treasury Department to hold back as much as half of the aid funds for up to one year following certification.

There's more coming to Texas than just state aid, Hicks said, including $10 billion for local aid and another $12 billion earmarked for public education. Hicks said the education aid money should reach the states first, but that it comes with conditions. Throughout the session, Nelson has repeatedly raised concerns about issues that could arise from taking money with federal strings attached. "That twelve billion sounds real attractive, but there's some real significant maintenance of effort requirements that we need to look at very carefully before we accept that money," she told members.

Wednesday's discussion came as the committee is finalizing workgroup recommendations and preparing to present a final draft of the budget to the full Senate for consideration. The initial budget proposed spending around $250 billion in both federal and state funds, so the nearly $30 billion state, local and education aid headed to Texas through ARPA would have a significant effect on what that budget looks like. Nelson told members, however, there are too many unknowns to count on federal aid when planning allocations for the next biennium. "I want to manage expectations; we don't have $17 billion to spend between now and the end of session like a lot of people seem to think," she said. "I'm delighted that we're going to have more money to spend on education and some other things - at some point. But right now, keep this budget tight."

The Senate will reconvene Thursday, March 25 at 12 p.m.