(AUSTIN) — Cities would have to seek voter approval before they cut police budgets under a bill approved by the Senate Jurisprudence Committee on Tuesday. Committee chair and Houston Senator Joan Huffman said SB 23, titled the "Back the Blue Act", is in response to calls to "defund the police" that arose during widespread national protests against law enforcement misconduct during the summer of 2020. She said that cutting police funding can lead to wage cuts and a lack of resources necessary to protect public safety. "Regrettably, we have seen some local officials attempt to cut law enforcement funding to score political points without regard to the consequences," she said. "Texans deserve to feel safe in their own communities, and this bill guarantees that local voters have input on these critical decisions that affect their lives, their communities and the safety of themselves and their children." She added that it should serve to incentivize better police conduct, as the people of a jurisdiction would have the final say on proposed cuts. 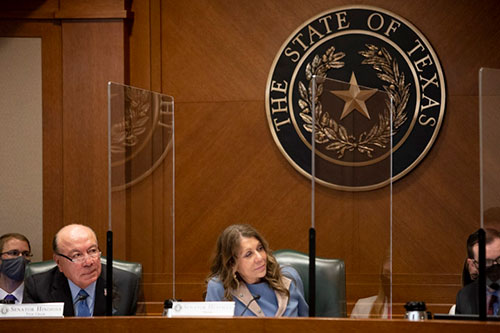 Senator Joan Huffman of Houston passed two bills related to law enforcement out of committee Tuesday. One would require voter approval before reducing police budgets, the other would increase scrutiny of applicants at law enforcement agencies.

The bill would consider funding as a percentage of the budget, rather than a dollar amount in a line item. This would allow city councils to make commensurate cuts of the police budget in years when the entire city budget is reduced. As long as the police budget remains the same percentage, the city wouldn't risk sanction by the state comptroller, who would be empowered to prohibit a city council from raising property taxes for one year if it is found to have violated the law proposed by the measure. The bill will now head to the full Senate for consideration.

The committee approved two other key bills Tuesday. The first would require law enforcement agencies to improve applicant screening processes. Huffman, also the author of SB 24, says that many agencies already do this, but a lack of statewide standards mean that some bad actors slip through the cracks. The Texas Commission on Law Enforcement reported that of 2,800 dishonorable discharges among Texas peace officers over the last five years, only nine have resulted in license revocation. "Part of the reason for this is that hiring practices differ widely between law enforcement agencies across the state," she said. Her bill would create a uniform standard, requiring that any law enforcement agency conduct a criminal background check, examine the applicant's driving record and require both personal and professional references. "Sounds like common sense," said Huffman.

The third bill sent on to the Senate by the panel would change the makeup of the state's utility regulator, the Public Utility Commission. The PUC has been under fire for the partial failure of the state electric grid during the February winter storm, leading to the resignation of all three commissioners. Bill author and Georgetown Senator Charles Schwertner said these resignations in combination with committee testimony about the crisis over the last weeks show that change is needed at the top. "We cannot leave this session without market reform. This bill is one small step in that direction," he said. SB 2154 would increase the number of commissioners from three to five, and would permit individuals with particular expertise in utility regulation, including engineers, attorneys or accountants, to serve on the board. It would also require that all members reside in Texas.

If it becomes law, it would also require the governor to appoint a chair to the committee within 30 days of the bill's effective date. Outgoing chair Arthur D'Andrea has said he will continue to serve in the role until a replacement is named. Any nominee for his position would have to pass Senate confirmation. The Jurisprudence Committee has scheduled a hearing on the Senate's comprehensive electric grid reform bill — SB 3, also by Schwertner — for Thursday at 9 a.m.

The Senate will reconvene Wednesday, March 24 at 1 p.m.