(AUSTIN) — In order to protect the most vulnerable Americans from COVID infection as the disease spread across the country, visitations to long-term care facilities, including nursing homes, were suspended last March. This well-intentioned decision led to untold suffering as residents in these homes were cut off from friends and family, said Brenham Senator Lois Kolkhorst. “We didn’t understand the pandemic, we had not seen something like this and we were working to protect all of Texas,” she said. “But when we were doing some of those protections, we were also creating some harm.” She put forth legislation Tuesday that would create a guaranteed right to visit loved ones in long-term care facilities, even in the middle of a pandemic, in both state law and the Texas Constitution. 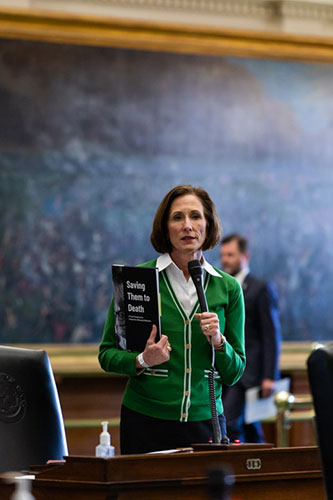 As its first non-emergency legislation of 2021, the Senate gave unanimous approval to two measures from Senator Lois Kolkhorst of Brenham. Her bills would guarantee the right of residents at nursing homes and other long-term care facilities to visitation, even during pandemic conditions.

Following federal guidelines, Governor Greg Abbott suspended nursing home visits on March 19, 2020. Those guidelines say that the older a person is, the greater the risk from the virus, and out of more than 2,000 nursing homes in Texas, the state health department says only five avoided an outbreak. Even with visitation suspended and heightened safety measures, 8,000 residents died from COVID-19. The risk was real, and the government and healthcare community did what they thought was best, said Kolkhorst. “That’s not the nursing homes’ fault, at all,” she said. “It was a mandate; we were trying to protect them.” Nevertheless, “we were saving the body but killing the soul,” as New Braunfels Senator and ER physician Donna Campbell put it during the hearing on this bill. Kolkhorst said that after the initial shock of COVID passed, the number one call her office received was from sons, daughters, and other family members, all distraught and angry that they couldn’t visit loved ones in these long-term care facilities. Other members said they heard the same pleas. Senator Judith Zaffirini of Laredo held virtual meetings on the issue, watched by thousands across the state. She said those Texans who participated in the first one were furious about being kept from visitation. “So much so that I called the Lt. Governor’s staff, I called the Governor’s staff, I called the agency’s staff,” said Zaffirini. “We had an immediate meeting afterwards and said, ‘we have a problem’.”

By September, the Governor eased visitation restrictions, giving residents or their legal guardians the right to designate one or more “essential caregivers” who were permitted regular visitations with long-term care residents. This was not restricted to healthcare workers nor did it require designated family members to provide medical care but recognized the critical need for family interaction. “I really call it an emotional care giver,” said Houston Senator Paul Bettencourt. “That’s really what we walled off for a year.” SB 25 would make the governor’s order part of state law. Its companion measure, SJR 19, would put the question on the ballot in November, allowing Texans the chance to enshrine a right to visitation in the state constitution.

These rules would only apply in the middle of an infectious health emergency, such as the COVID pandemic, and otherwise general visitation policies would apply. If there is another pandemic and visitation rights are restricted, SB 25 would require facilities to permit up to two hours of visitation between designated essential caregivers and residents. Caregivers would be permitted physical contact with loved ones and could not be placed under safety protocols stricter than those for facility staff.

At one point in the discussion with Senator Bettencourt, Kolkhorst became overwhelmed with emotion as she recounted the fraught calls with constituents desperate to visit a loved one, who they had only seen through a window or only talked with over the phone for months. “We can’t do this to people,” she said. Bettencourt assured her that he believed we wouldn’t ever again. “I think this constitutional amendment will pass by ninety-some-odd-plus percent,” he told Kolkhorst. “No one wants to have this experience again.”

The Senate will reconvene Thursday, March 18 at 4 p.m.