(AUSTIN) — In extraordinary, unscheduled floor action Monday, the Senate approved a bill directing the Public Utility Commission (PUC) to order the state electric grid and market operator to correct billions in erroneous electric charges during the February winter storm. "If this is not fixed, the customers, the rate payers, the people of Texas; they'll be bearing this," said bill sponsor and Mineola Senator Bryan Hughes. During testimony on the issue at last Thursday's Senate Jurisprudence Committee, PUC Chair Arthur D'Andrea told senators that the legislature, not the commission, has the power to change billing errors. In response, SB 2142 was filed, referred to, heard in committee, and passed by the full Senate in just a day - weeks faster than the typical legislative timeline for a bill. 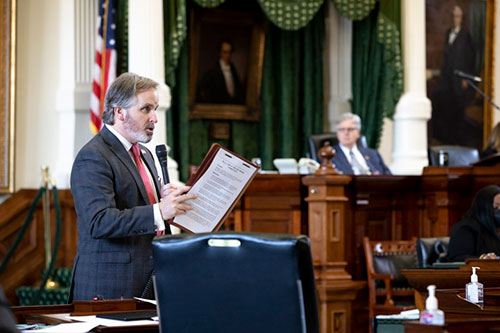 At issue is billions in overcharges assessed to electric providers over a 32-hour period beginning late Wednesday, February 17th and running through Friday morning, in which the price of electricity was pegged at the maximum allowed under the rules - $9,000 per megawatt hour. On a typical day, the price per megawatt is around $30 per megawatt hour. The Electric Reliability Council of Texas (ERCOT) set the price that high when the system was under stress as an incentive to generators to bring power online during the worst of the emergency. But once the immediate emergency passed, ERCOT CEO Bill Magness made the decision to remain at the maximum price, rather than letting the market set the price under ERCOT rules. Magness testified last week that he made the call to keep the price where it was in order to ensure that a demand spike or supply loss didn't put the grid at risk again. Hughes said Monday that Magness' explanation isn't sufficient. "It had reached a point where everyone who could produce was producing and, under the ERCOT rules, these producers weren't allowed to get back off," he said. "There was no need to keep the price at $9,000 in terms of keeping those producers in, because they had to stay in."

In testimony before last week's Jurisprudence hearing, a representative of the independent market monitor that oversees ERCOT told members that these overcharges generally affected the demand side of the market, rather than the power generation side. One large electric co-operative has already declared bankruptcy. Though almost all electric customers in Texas are under fixed rate contracts, the concern is that these overcharges will be passed on in the form of higher rates in the future. "If we don't do this, the real losers are going be our citizens," said Senator Bob Hall. "They will eventually pay for this, one way or the other." Georgetown Senator Charles Schwertner pointed out that ERCOT routinely corrects billing errors. "There is a mechanism for that in their rules and procedures," he said. "This piece of legislation just directs ERCOT to do what they should do for the people of Texas." Ultimately, the bill passed overwhelmingly, 27-3, and will now head to the House for its consideration.

Abbott gave the issue his emergency tag last week and backed up D'Andrea's assertion in a letter released on Friday evening, saying that the Legislature, not the PUC, should act. Lt. Governor Dan Patrick said from the rostrum following passage that he believes the House will act quickly if Governor Greg Abbott indicates he will sign the bill. “The Senate has acted," said Patrick. "We are asking the governor to join us, I think if he will say he will sign this bill, it may help us get this bill through the House." The House State Affairs Committee is scheduled to hear testimony related to the ERCOT overcharge Tuesday morning. The bill passed by the Senate calls for the charges to be corrected by Saturday.

The Senate will reconvene Tuesday, March 16, at 3 p.m.